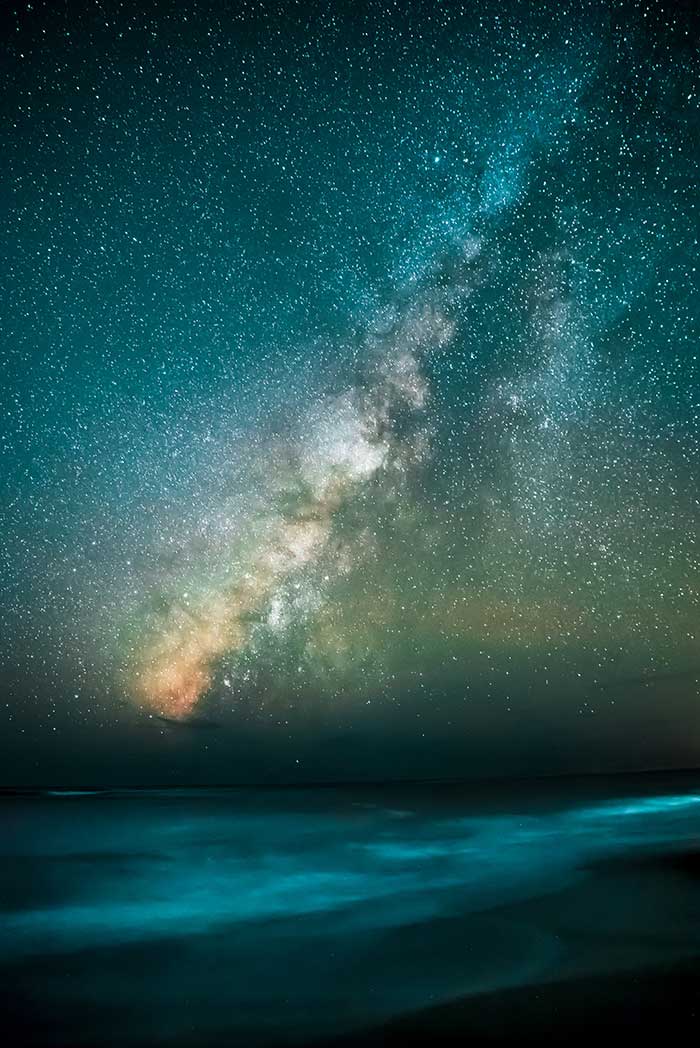 Our planet Earth is part of the solar system which comprises eight planets, numerous comets and asteroids which orbit the Sun and this solar system is located in Milky Way galaxy in the universe. Our sun is one amongst the billions of stars in this galaxy and there are more than 100 billion galaxies in the universe. Galaxies are systems made up of billions of stars, gas and dust held together by gravitational attraction. Milky way galaxy is typical spiral shaped with four arms attached to the disk. Earth is located at exactly two-thirds of the way out from the galactic centre of the galaxy with a distance of 26,000 light years between them. Milky way galaxy is known to have started forming approximately 12 billion years ago. A group of 50 galaxies have been termed as the Local Group and Milky Way is part of this. Half of the galaxies in The Local Group are elliptical in shape and the others are spiral or irregular. Galaxies are generally clustered in correct orientation and pulled together by their shared gravitational attraction. Andromeda galaxy (M31), the largest galaxy is this group has two spiral arms and a ring of dust (perhaps from a smaller galaxy M32). The Andromeda galaxy is our closest biggest galactic neighbour and it can be spotted with naked eye from Earth. Because of this proximity, Andromeda galaxy is used to study the origins and process of evolution of many galaxies. It is expected that Milky Way and Andromeda galaxies will collide with each other in about 4.5 billion years resulting in creation of a giant elliptical galaxy.

Astronomers have studied the Milky Way, Andromeda and their associated galaxies for decades. The invigorating, diverse and fun field of astronomy has always intrigued many scientists worldwide as most of the information about our universe still remains a mystery. Though even if we didn’t know much about galaxies, life would still continue the way it is on our planet. Earth and our solar system comprise only a tiny region of the Milky Way galaxy. However, scientifically, galaxies are important because they help us to estimate the size of the ever-expanding universe as galaxies have formed the universe in the first place. So, studying about galaxies is crucial to understand and learn more about other parts of space outside our own solar system. Learning more about the cosmos gives us insights into questions like what or who else is out there, are there other long surviving species like humans, is there another intelligent race? Such questions are eternal to understanding the successful existence of our species on planet earth. The exploration of the universe is fuelled further by existing knowledge and added imagination, curiosity and inquisitiveness.

Researchers at University of Michigan have for the first time discovered a “long lost big sibling” of Milky Way galaxy called the M32p galaxy which had combined with Milky Way during its life period. This galaxy was bigger than any galaxy with its size being estimated to be more than 20 times heavier than our galaxy. It is observed that M32p was shredded and torn apart by Andromeda galaxy more than two billion years ago. This makes M32p as the third largest galaxy after Andromeda and Milky Way. Even though disrupted, galaxy M32p has left behind a trace of evidences to consolidate its existence in the past. These evidences were put together using computer models. The evidences include almost invisible halo stars (even larger than the whole Andromeda galaxy), a stream of stars and independent enigmatic compact galaxy M32. The invisible halo of stars, specifically, consists of remnants of smaller shredded galaxies and this fact is well established. The smaller companions of these invisible halo of stars are thought to be consumed by Andromeda therefore making it difficult to analyse one of such companions. However, while doing computer simulations scientists have understood that most of the stars which are in the outer halo of Andromeda (spherical region surrounding the galaxy’s disk) seem to come by shredding of a “single” large galaxy which is then most likely M32p. This information in outer halo of Andromeda can be used to understand the largest galaxy which has been shredded by it. Andromeda, also called M31 is a huge spiral galaxy which is thought to have shredded many smaller counterparts over a long duration of time. These mergers are highly complex and not much detailed information has been deduced about them.

The information retrieved from this work published in Nature Astronomy is amazing to say the least. Firstly, it is now very clear how Andromeda’s mysterious M32 satellite galaxy evolved as this study provides a way to reconstruct some details of the now dead galaxy. M32 is a unique, compact and elliptical galaxy having many young stars. Studying this shredded galaxy will then help us comprehend how Milky Way has evolved, progressed and has survived mergers. Methods used in this study can be utilized for other galaxies to determine their big galaxy mergers if any. It can shed light on causes and effects which fuel growth of galaxies and also their mergers. All such information when put together can help to further our understanding of the universe, a huge, beautiful place where we exist and of which our planet Earth is just a meagre part.

Complete Connectivity Diagram of the Nervous System: An Update

Success in mapping the complete neural network of male...

RNA Technology: from Vaccines against COVID-19 to Treatment of Charcot-Marie-Tooth disease