Abell 2384: The New Twist in the Story of Merger of Two ‘Galaxy Clusters’ 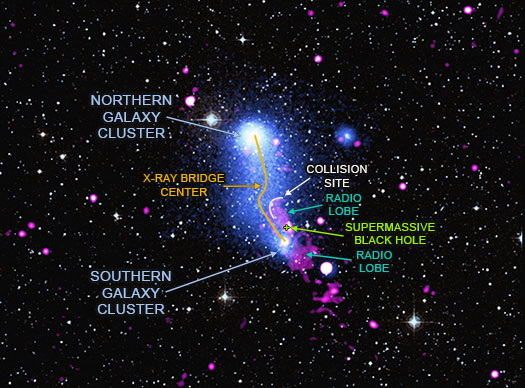 X-ray and radio observation of galaxy system Abell 2384 reveals collision of two galaxy clusters that travelled through each other forming a binodal system with a bridge of superhot gas between two cluster lobes and a bend in the bridge due to powerful jet of hot gas shooting away from a super heavy blackhole in the centre of a galaxy in the cluster.

To put the whole thing in a perspective, the earth along with other planets and their satellites are part of the ‘stellar system’ of a star called sun. Each star may have such a system comprising of bodies orbiting them. Large number of stars bound together by gravity form a celestial entity called galaxy. For example, our solar system is part of a galaxy called ‘milky way’ which alone has about 100 thousand million stars, each with their own stellar system. Hundreds of galaxies bound together by gravitational field form what we call ‘galaxy cluster’.

‘Galaxy clusters’ are the largest objects in the universe, each comprising of hundreds of galaxies together with vast amount of super-hot gas cloud and large amount of dark matter. The interspersed superhot (30 – 100 million degrees Celsius) gas cloud is invisible to optical telescope but emits x-rays observable by the x-ray telescope. The dark matter does not emit, absorb or reflect any electro-magnetic radiation hence is not observable by any kind of telescope, but only by their gravitational interaction with the ‘white’ matter.

Several hundred million years ago, at a distance of about 1.2 billion light years away from us, two galaxy clusters collided and travelled through each other forming a merger-like system called Abell 2384 or A2384. Located in the constellation capricornus (one of the constellations of Zodiac and is known as ‘goat horn’), Abell 2384 is about 17 million light years across in size with two unequal cluster lobes connected by a three million light-year long bridge of hot gas.

The x-ray data obtained from the space observatories revealed high-density region extended between the two cluster heads corresponding to the unique hot gas bridge. Radio observation indicated x-ray-radio interaction at the cluster outskirts indicative of a peculiar radio galaxy. The conclusion is that of a powerful jet shooting away from a supermassive black hole in the centre of a galaxy within the galaxy cluster leading to bend in the shape of the gas bridge.

This study is significant for the developing knowledge base about growth and course of merger of galaxy clusters in the universe. Simulation suggests that the north and south clusters in the system Abell 2384 will eventually merge together with each other.

1. United space in Europe (European Space Agency) 2020. A bent bridge between two galaxy clusters. Post 11 May 2020. Available online at http://www.esa.int/Science_Exploration/Space_Science/A_bent_bridge_between_two_galaxy_clusters Accessed on 13 May 2020.

Scientists have demonstrated for the first time a multiple-person...

There is no clarity on the natural origin of...
- Advertisement -
Join Our Facebook Group
101,285FansLike
75,478FollowersFollow
1,964FollowersFollow
31SubscribersSubscribe
ADVERTISEMENT