The Fireworks Galaxy, NGC 6946: What Make this Galaxy so Special? 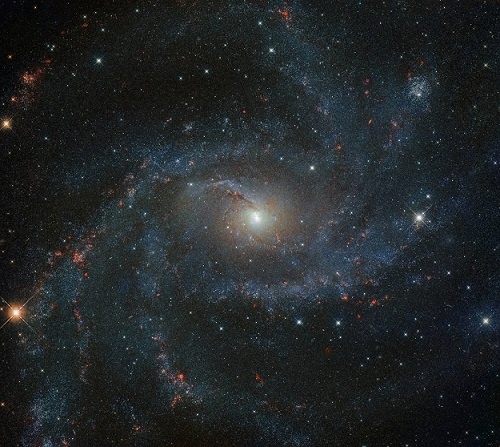 A galaxy is a system of stars, remnants of stars, interstellar gas, dust, and dark matter that are bound together by gravitational force. According to an estimate, there are about 200 billion galaxies in the observable universe (2). The solar system along with the sun is part of the galaxy called Milky Way which is our home galaxy.

NGC 6946 (NGC stands for New General Catalogue which is a common way of labelling astronomical objects) is one of the galaxies situated at a distance of 7.72 Mpc {1 Mpc or Megaparsecs equal to a million parsecs; in astronomy, the preferred unit of distance is parsec (pc). 1 parsec is the distance at which 1 Astronomical Unit subtends an angle of 1 second of arc viz.1/3600 of a degree; 1 pc equals 3.26 light years} or 25.2 million light-years in the constellation Cepheus.

The galaxy, NGC 6946 has an exceptionally high rate of star-formation hence classified as a starburst galaxy. This type of galaxies are characterised by high star-formation rates in the order of 10 – 100 M☉/year which are far higher than in normal galaxies, for example in our home galaxy Milky Way, the star-formation rate is about 1 – 5 M☉/year (3) (M☉ is the solar mass, the standard unit of mass in astronomy, 1 M☉ is equal to approximately 2×1030 kg.).

On our time scale, stars appear to be unchanging but on the time scale of billions of years, stars undergo a life course, they are born, age and finally die. The life of a star begins in a nebula (cloud of dust, hydrogen, helium and other ionized gases) when the gravitational collapse of a giant cloud give rise to a protostar. This continues to grow further with accretion of gas and dust until it reaches its final mass. The final mass of the star determines its life time (lesser the mass, higher the life span) as well as what happens to the star during its life.

All stars derive their energy from nuclear fusion. The nuclear fuel burning in the core creates strong outward pressure due to the high core temperature.This balances out the inward gravitational force. The balance is disturbed when the fuel in the core runs out. Temperature drops, outward pressure diminishes. As a result, the gravitational force of the inward squeeze becomes dominant forcing the core to contract and collapse. What a star finally ends up as after collapse depends on the mass of the star.

In the case of supermassive stars, When the core collapses in a short span of time, it creates enormous shock waves. The powerful and luminous explosion is called supernova. This transient astronomical event occurs during the last evolutionary stage of a supermassive star. The galaxy NGC 6946 is called the Fireworks Galaxy because it has experienced 10 observed supernova in the last century alone. In comparison, the Milky Way averages just one to two supernovae per century. Therefore, a good number of supernova remnants are expected in NGC 6946 galaxy. The total number of supernova remnant candidates identified in NGC 6946 is about 225 (4,5). For stars more than 10 times the mass of the sun, the remnants would be black holes, the densest objects in the universe.

The high star-formation rate (starburst), the high rate of supernova events (fireworks) features, spiral structure and it being positioned face-on with us sets this galaxy apart giving rise to its spectacular appearance in the images taken by the Hubble telescope.

Study describes a new mechanism which mediates the symbiont...