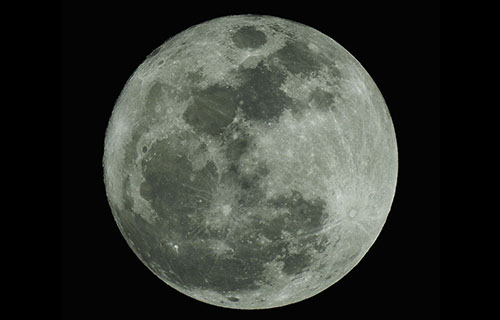 Though data from orbiters have suggested presence of water ice, the exploration of lunar craters in the polar regions of moon has not been possible due to the absence of suitable technology to power lunar rovers in the perpetually dark, super cold areas having a temperature of –240°C. The project PHILIP (‘Powering rovers by High Intensity Laser Induction on Planets’) commissioned by European Space Agency is ready to develop prototypes that would provide laser power to these rovers in an effort to explore evidence of existence of water in these craters.

Moon does not rotate on its axis as it revolves around the earth hence the other side of the moon is never visible from the earth but both sides receive two weeks of sunlight followed by two weeks of night.

However, there are sunken areas in craters situated in the polar regions of moon that never receive sun-light because low angle of sunlight that leave the deep interiors of the craters in shadow forever. This perpetual darkness in the polar craters make them super cold in the range of –240°C corresponding roughly to about 30 Kelvin i.e. 30 degrees above absolute zero. The data received from the lunar orbiters of ESA, ISRO and NASA have shown that these permanently shadowed areas are rich in hydrogen, suggestive of presence of water (ice) in these craters. This information is of interest for science as well as a local source of ‘water and oxygen’ for future moon human habitation. Therefore, there is a need of a rover that could go down to such craters, drill and bring sample for testing to confirm presence of ice there. Given lunar rovers are usually solar powered, this has not been achieved so far because it has not been possible to ensure power supply to rovers while it explores some of these dark craters.

One consideration was to have nuclear powered rovers but this was found to be unsuitable for ice exploration.

Taking a cue from the reports of use of laser to power drones to keep them aloft for a longer duration, the project PHILIP (‘Powering rovers by High Intensity Laser Induction on Planets’) was commissioned by European Space Agency to design a complete laser-powered exploration mission.

The PHILIP project is completed now and the ESA is one step closer to powering lunar rovers with lasers to explore the super cold dark lunar craters near the poles.

ESA would now begin to develop prototypes for exploring the dark craters that would provide evidence for confirmation of the presence of water (ice) leading to realisation of human dream to inhabit this satellite.

The Genetic Ancestors and Descendants of the Indus Valley Civilisation

The Harappan Civilisation was not a combination of recently...