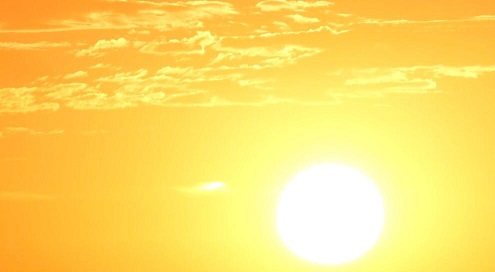 Solar wind, the stream of electrically charged particles emanating from the outer atmospheric layer corona of Sun, poses threat to life form and electrical technology based modern human society. Earth’s magnetic field provide protection against the incoming solar wind by deflecting them away. Drastic solar events like mass ejection of electrically charged plasma from the corona of Sun creates disturbances in the solar wind. Therefore, study of disturbances in the conditions of solar wind (called Space weather) is an imperative. Coronal Mass Ejection (CMEs), also called ‘solar storms’ or ‘space storms’ is associated with the solar radio bursts. Study of solar radio bursts in the radio observatories can give an idea about CMEs and solar wind conditions. The first statistical study (published recently) of 446 recorded type IV radio bursts observed in the last solar cycle 24 (each cycle refers to the change in Sun’s magnetic field every 11 years), have found that the majority of Long Duration Type IV Radio Solar Bursts were accompanied by Coronal Mass Ejection (CMEs) and disturbances in the solar wind conditions.

Just the way weather on Earth is affected by the disturbances in the wind, space weather’ is affected by the disturbances in the ‘solar wind’. But the similarity ends here. Unlike wind on Earth which is made of air comprising of atmospheric gases like nitrogen, oxygen etc, the solar wind consists of superheated plasma comprising of electrically charged particles like electrons, protons, alpha particles (helium ions) and heavy ions that continuously emanate from the sun’s atmosphere in all directions including in the direction of Earth.

Sun is the ultimate source of energy to life on Earth hence respected in many cultures as giver of life. But there is other side too. The solar wind, the continuous stream of electrically charged particles (viz. plasma) originating from the solar atmosphere poses threat to the life on Earth. Thanks to Earth’s magnetic field that deflects most of the ionising solar wind away (from the Earth) and the Earth’s atmosphere that absorb most of the remaining radiation thus providing protection from the ionising radiation. But there is more to it – in addition to threat to the biological life forms, solar wind also poses threat to electricity and technology driven modern society. The electronic and computer systems, power grids, oil and gas pipelines, telecom, radio communication including mobile phone networks, GPS, space missions and programmes, satellite communications, internet etc. – all these can potentially be disrupted and brought to standstill by disturbances in solar wind1. Astronauts and the spacecrafts are particularly at risk. There were several instances of this in the past e.g., March 1989 ‘Quebec Blackout‘ in Canada caused due to massive solar flare had badly damaged power grid. Some satellites too had suffered damages. Therefore, the imperative to keep a watch on conditions of the solar wind in the vicinity of the Earth – how its characteristics like speed and density, magnetic field strength and orientation, and energetic particle levels (i.e., space weather) will have an impact on life forms and modern human society.

Like ‘weather prediction’, can ‘space weather’ too be predicted? What determines the solar wind and its conditions in the vicinity of Earth? Can any serious changes in space weather be known in advance to take pre-emptive actions to minimise damaging impact on Earth? And, why at all does the solar wind form?

Sun is a ball of hot electrically charged gas and therefore, it does not have a definite surface. The photosphere layer is treated as surface of the sun because this is what we can observe with light. Layers below the photosphere inwards towards the core are opaque to us. Solar atmosphere is made of layers above the photosphere surface of the sun. It is the transparent gaseous halo surrounding the Sun. Better seen from the Earth during the total solar eclipse, solar atmosphere has four layers: chromosphere, solar transition region, corona and heliosphere.

Solar wind is formed in corona, the second layer (from outside) of the solar atmosphere. Corona is a layer of very hot plasma. While the temperature of the surface of the Sun is about 6000K, the average temperature of corona is about 1-2 million K. Called ‘Coronal Heating Paradox’, the mechanism and the processes of heating of corona and acceleration of the solar wind to very high speed and expansion into interplanetary space is not well understood yet, 2 though in a recent paper, researchers have sought to solve this by way of axion (the hypothetical dark matter elementary particle) origin photons 3.

Occasionally, huge amount of hot plasma is ejected from corona into the outermost layer of solar atmosphere (heliosphere). Called Coronal Mass Ejections (CMEs), the mass ejections of plasma from corona are found to generate large disturbances in solar wind temperature, velocity, density and interplanetary magnetic field. These create strong magnetic storms in the geomagnetic field of the Earth 4. Eruption of plasma from corona involves acceleration of electrons and acceleration of charged particles generates radio waves. As a result, Coronal Mass Ejections (CMEs) is also associated with bursts of radio signals from the Sun 5. Therefore, space weather studies would involve study of timing and intensity of mass ejections of plasma from the corona in conjunction with the associated solar bursts which is a Type IV radio burst lasting for long-duration (greater than 10 min.).

The occurrence of radio bursts in the earlier solar cycles (the periodic cycle of Sun’s magnetic field every 11 years) in relation to Coronal Mass Ejections (CMEs) has been studied in the past.

Understanding the timing of type IV long duration bursts and the CMEs in an incremental manner will help in the design and timing of the ongoing and future space programs accordingly, so as to lessen the impact of these on such missions and ultimately on the life forms and the civilization on Earth.

Researchers have reported a new way to treat Urinary...

A Novel Method for Real Time Detection of Protein Expression

Protein expression refers to the synthesis of proteins within...