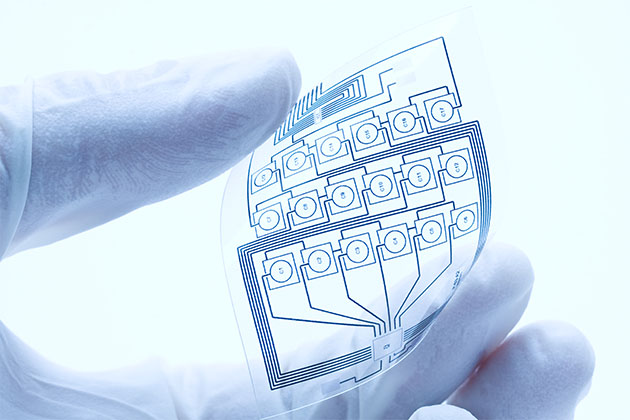 Engineers have invented a semiconductor made by a thin flexible hybrid material which can be used for displays on electronic devices in the near future.

Engineers at large corporations have been eyeing to design a foldable and flexible display screen for electronic devices like computers and mobile phones. The goal is a display screen which would feel like a paper i.e. be bendable but also function electronically. Samsung, one of the largest mobile phone manufacturers in the world will in all probability be launching a flexible mobile phone very soon. They have developed a flexible organic light emitting diode (OLED) panel which has an unbreakable surface. It is lightweight but tough and robust and can withstand high temperatures. Its most remarkable feature would be that this display will not break or be damaged if the device falls – the biggest challenge faced today by mobile phone display designers. A regular LCD screen continues to display even when bent but the liquid inside it becomes misaligned and hence a distorted image is displayed. The new flexible OLED screen could be bent or curved without distorting the display, however, it still won’t be completely foldable. The flexibility can be further increased by using more flexible nanowires in the future. A quantum dot light emitting diode display is more flexible because of the use of nano-crystals to produce high-quality sharp light. The displays still have to be encapsulated into glass or other material for protection.

In a recent study published in Advanced Materials engineers from The Australian National University (ANU) have for the first time developed a semiconductor made from organic and inorganic material which efficiently converts electricity into light. This semiconductor is ultra-thin and very flexible making it unique. The organic part of the device, an important part of the semiconductor has a thickness of only one atom. The inorganic part is also small, about two atoms thick. The material was constructed by a process called ‘chemical vapor deposition’, similar to building a 3-dimensional structure from a 2D description. The semiconductor cannot be seen with naked eye, it rests between gold electrodes on a chip of size 1cm x 1cm having a functional transistor. One such chip can hold thousands of transistor circuits. The electrode serves as electricity input and output point. Once constructed opto-electronic and electrical properties of the material were characterized. This hybrid structure of organic and inorganic components converts electricity into light which then provides display on mobile phones, televisions and other devices. The light emission is seen to be sharper and better for higher-resolution displays.

Such a material can be used in the near future to make devices bendable – example mobiles phones. Screen or display damage is very common in mobile phones and this material can come to the rescue. With popularity and demand of smart phones with bigger screens growing, the need of the hour is to have durability so that the display is not prone to scratches or breaks or fall etc. The hybrid structure is advantageous in terms of efficiency over traditional semiconductors which are made entirely of silicon. This material could be used to build screens for mobile phones, television, digital consoles etc and maybe build computers one day and or make a mobile phone as strong as a supercomputer. Researchers are already working on producing this semiconductor on a larger scale so that it can be commercialised.

It is estimated that 2018 will be produce a total of almost 50 million tons of electronic waste (e-waste) and very limited quantity would be recycled. E-waste constitutes electronic devices and equipment which have reached the end of their life and need to be discarded including old computers, office or entertainment electronic equipment, mobile phones, television etc. Massive amount of e-waste is a huge threat to the environment and is bound to cause irreversible damage to our natural resources and surroundings. This discovery is a starting point for designing electronic devices exhibiting high performance but which are made from organic ‘bio’ materials. If mobile phones were made of a flexible material they would be easier to recycle. This will cut down on e-waste generated annually across the globe.

The future of foldable and flexible electronic devices is going to be very exhilarating. Engineers are already thinking of rollable displays where devices can be rolled up like a scroll. The most advanced type of display screen would be which can fold, curve or even crush like paper but can continue to display neat images. Another area is the use of ‘auxtetic’ materials which become thicker when they are stretched and which can absorb high energy impacts and self-realign to correct any distortion. Such devices would be lightweight yet flexible.