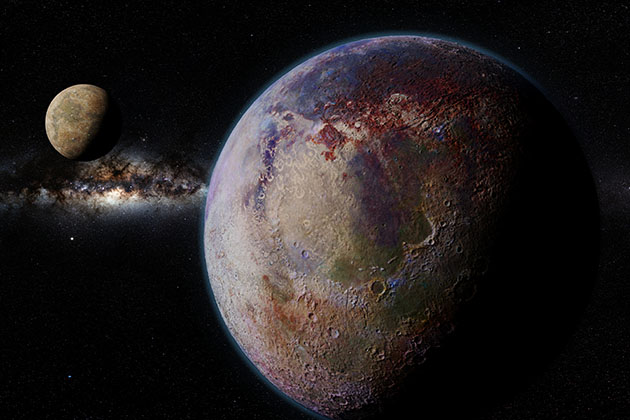 Moon is a celestial object which are either rocky or icy and there is a total of 200 moons in our solar system. This includes Earth’s moon which is our planet’s own permanent natural satellite. Moon orbits the Earth as the planet Earth orbits the star Sun. In our solar system only two planets – Mercury and Venus- do not have moons. There are plenty of planets beyond our solar system called ‘exoplanets’ which have been confirmed by researchers, though no confirmation is available on moons. For the first time a pair of astronomers Alex Teachey and David Kipping at Columbia University have found strong evidence of a moon in another solar system. Although 3,500 exoplanets are known, this is the first time an exomoon has been discovered. This moon is orbiting a giant planet in another star system which is 8000 light years away from us. Its being called an ‘exomoon’ as it orbits a planet in another solar system. This celestial object is unique owing to its huge size – diameter being similar to that of planet Neptune or Uranus – and it also looms over a giant Jupiter-sized planet and their pairing has been remarked as a ‘super-size pairing’. The exomoon is nine times bigger than Jupiter’s Ganymede which is the largest moon is our solar system. The Hubble Space telescope and Kepler telescope from The National Aeronautics and Space Administration (NASA) have been used to make this significant discovery through investigations into distant star, planet and a possible moon.

In this study published in Science Advances what is being hailed as a milestone in astronomy, Teachey and Kipping examined data from 284 exoplanets which have been discovered till date by Kepler telescope which were seen in wide orbits for more than one month around their stars. The observations were able to measure brief dimming of a star’s light when the planet passed in front of the star i.e. during the transit. Exoplanets are discovered by astronomers by observing this reduction in brightness of the star which the planet orbits. This method is called the ‘transit method’. Theoretical models of planet formation are unable to make such predictions and that is why the transit method is used. This planet (or exoplanet), called Kepler 1625b was the only planet around the particular star. When analysing observations, researchers found one particular instance with interesting features and anomalies. This star is about the 70 percent larger than our Sun but is older and the planet is at the same distance from its star as Earth is to the Sun. Although the object was not visible but many evidences hinted towards its existence. Particularly, small deviations and wobbles were seen in the light curve. This was an interesting result based upon which researchers intensively studied the planet for around 40 hours using the Hubble telescope. Before and during the 19-hour transit of the planet across the star observations were recorded. The planet is thought to be revolving around its star in such way that it looks like a possible moon is pulling onto it gravitationally. When the planet moved in front of the star, the star’s light was dimmed very much hinting that there was something else present too. This dimness in stellar brightness was similar to the movement of the moon around the planet as only a moon could cause this kind of uncertain and wobbly path and this made for a strong evidence.

Similar observations and anomalies in the timing would be seen if someone from outside of our solar system (extra-terrestrial) were watching the moon transit our planet Earth. This exomoon would be around 2 million miles (3 million km) from its star and would actually appear twice the bigger size than our moon appears on Earth. Researchers plan to re-observe the star again sometime in the future to make further verifications, probably in 2019. What they have observed in their first attempt definitely points towards this judgement and so other possibilities have been ruled out. Also, the massive size of the exomoon and its planet helped the researchers as bigger things are easier to detect. Also, because a moon is orbiting the planet its position keeps shifting with transit. This is a remarkable achievement since moons are otherwise difficult to locate owing to their size compared to host planet and therefore they exhibit weak transit signal. The host planet and moon are both gaseous entities so researchers definitely won’t be looking for signs of life. Though both these entities lie in the host star’s habitable region where liquid water or other solids could perhaps exist because of moderate temperatures.

This is the first time an exomoon has been discovered. This study makes an extraordinary claim and many astronomers believe all this information needs to be grasped with some apprehension and certainly needs more evidence and further investigation. This study if successfully conducted further can provide us with more understanding about how moons are formed and what are they made of and how do planetary systems develope and what does out solar system have in common with the others.

In order to raise levels of protection across the...

A new study shows an innovative method to tackle...

Have We Found the Key for Longevity in Humans?

A crucial protein which is responsible for longevity has...
- Advertisement -
Join Our Facebook Group
100,477FansLike
71,803FollowersFollow
6,458FollowersFollow
31SubscribersSubscribe
ADVERTISEMENT