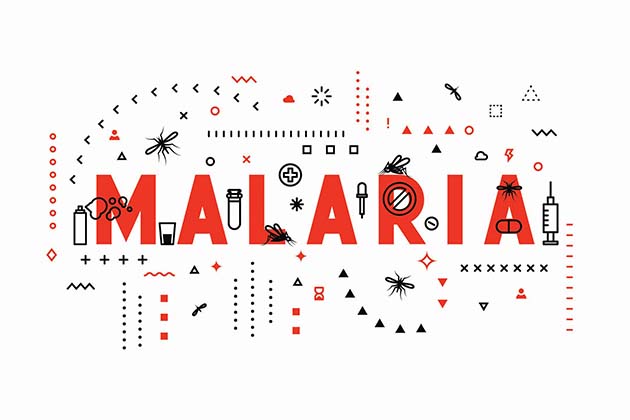 Malaria is one of the most severe public health problems worldwide. It is a life-threatening disease caused by parasites – microscopic single celled organisms called Plasmodium. Malaria is transmitted to people through the biteof a “very efficient” infected female Anopheles mosquito. Every year approximately 280 million people get affected by malaria in more than 100 countries resulting in 850,00 deaths globally. Malaria is predominately found in the tropical and sub-tropical areas of Africa, South America and Asia.It is one of the most important tropical parasitic disease and the second most deadly communicable disease after tuberculosis. The African region carries a disproportionately high share of the global malaria burden with more than 90 percent cases and deaths in this region alone. Once bitten by a parasite-carrying mosquito, the parasite infects people and causes the symptoms of malaria like high fever, chills, flu-like symptoms, and anemia. These symptoms are particularly dangerous for pregnant women and also children who sometimes have to suffer lifelong side effects of the disease. Malaria can be prevented and is also curable if its detected and treated with timely appropriate care, otherwise it can be fatal. There are two aspects to malaria research, one is controlling mosquitoes and the other is to create drugs and vaccines to prevent and control the infection. An understanding of how a malaria infection affects the human immune response can help in the larger goal of creating vaccines to prevent malaria.

Less than 100 years ago, malaria was endemic throughout the world including North America and Europe though now it has been eradicated in these continents. However, for humanitarian cause, it is important that malaria research stays relevant because worldwide huge number of people are affected by malaria and factually, three billion people live in at-risk areas for malaria. Multiple reasons have been cited why developed countries which face no occurrences of malaria, should be committed to eradicating malaria in developing and poor countries. These reasons include ensuring the basic human rights of every human being through justice and bolstering world security and peace. The risk is not just health wise, asit also affects the stabilization of economies and populations in developing parts of the world with people at risk for malaria by imposing high costs to both individuals and governments. Thus, it is imperative for developed nations to outreach and contribute to economic prosperity of not just these countries but also their own as they are interconnected.

Progress in malaria drugs and vaccines

Though, targeted prevention and treatment over the decades has reduced the number of malaria cases and also deaths, but the malaria parasite is a very tough enemy. The drug treatments often have to be taken daily to be effective and can be difficult to access, particularly in poor countries. Drug resistance is a major challenge for the known anti-malarial drugs hindering the control of malaria. This resistance generally occurs because each anti-malarial drug targets a particular strain of the parasite and when newer strains originate (because of the fact that some parasites evolve and survive the attack by a drug), the drugs are rendered useless. This problem of resistance is compounded by cross resistance, in which resistance to one drug confers resistance to other drugs that belong to the same chemical family or having similar modes of action. Currentlythere is no singly, highly effective and long-lasting vaccine to prevent malaria. After decades of research, only one malaria vaccine (called PfSPZ-CVac, developed by the biotechnology firm Sanaria) has been approved which requires four shots over a series of months and is seen to be only 50 percent effective. Why vaccines are mostly ineffective is because malaria has an extremely complex life cycle, and vaccines generally work when the malaria infection is at a very early stage i.e. in the liver. Once the infection moves to a later blood stage, the body is not able to create protective immune cells, and their antibodies and thus counteracts the mechanism of the vaccinerendering it ineffective.

A new candidate is here!

In a recent advancement1, 2 in malaria vaccine research published in two papers in Nature Medicine, scientists have discovered a human antibody that was able to protect mice from infection by the deadliest malaria parasite, Plasmodium falciparum. The researchers at National Institute of Allergy and Infectiousdiseases, Fred Hutchinson Cancer Research Center, Seattle and Center for Infectious Disease Research, Seattle,USA have proposed this new antibody as a potential candidate to not only provide short term protection against malaria but they state that this new compound might also assist in design of vaccines for malaria. Antibody, in general is one of the biggest and best defense mechanism of our body because they circulate throughout the body and bind/stick to very specific parts of the invaders – the pathogens.

Researchers isolated a human antibody, called CIS43, from a volunteer’s blood who had received a weaker dosage of an earlier experimental vaccine. This volunteer was then exposed to infectious malaria-carrying mosquitoes (under controlled conditions). It was seen that he was not infected with malaria. Also, these experiments were done on mice and they were also not infected, suggesting that CIS43 is highly effective in preventing malaria infection. How this CIS43 actually works was also understood. The CIS43 binds to a specific portion of an important parasite surface protein blocking its activity and hence disrupting the infection which was about to occur in the body. This disruption happens because once CIS43 is bound to the parasite, the parasite is unable to make it through the skin and into the liver where it’ssupposed to start an infection. This kind of preventive action makes the CIS43 a very attractive candidate for a vaccine and could be useful for health care workers, tourists, military personnel or others who travel to areas where malaria is common. Also, even if the antibody works only for several months, it can be combined with anti-malarial drug therapy for mass drug administration for total elimination of the disease.

This is a very exciting and revolutionary research in the field of malaria and discovery of this antibody could be a turning point in terms of therapeutics for this disease. Interestingly, the region on the parasite surface protein which binds to CIS43 is same or conserved almost 99.8 percent in all the known strains of Plasmodium falciparum parasite thus makes this region an attractive target for developing newer malaria vaccines apart from CIS43. This particular area on the malaria parasite has been targeted for the first time making it a novel study with scores of potentials in the future. Researchers plan to further assess the safety and efficacy of the newly described CIS43 antibody in human trials in the near future.

A combination of biological and computational approach to study...