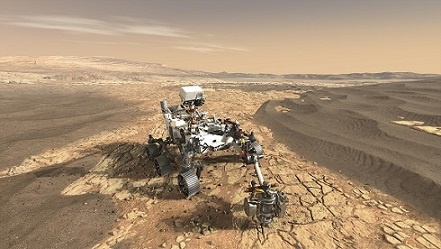 Launched on 30th July 2020, Perseverance rover has successfully landed on the Mars surface at Jezero Crater on 18th February 2021, after travelling almost seven months from Earth. Designed specially to collect sample of rocks, Perseverance is the biggest and the best rover ever sent to Mars. The sample catching system of the rover is one of most complex robotic system ever made. Mars once had water on its surface, suggesting primitive microbial organisms may have lived there in the past. In view of the detection of methane gas in the atmosphere of Mars in the recent past, there is a possibility of some form of microbial life being present even today. It is thought that the samples collected by the rover may have signs of life. However, this is one way trip of the rover to the Mars and the samples collected will be brought back to the Earth using future missions. The samples will then be analysed for the confirmation of ancient form of life on the Mars. Interestingly, the rover is carrying Ingenuity, a small helicopter that will explore areas like cliffs and craters where the rover cannot go.

Leave Earth before it’s too late, Carl Sagan had once warned in view of remote possibility of Earth being hit by an asteroid in future just the way it was 65 million years ago when dinosaurs were eliminated. It may be reasonable to think that the future of humanity lies in becoming space-faring species, in becoming a multi-planet species. And, here is an infinitesimally small step in that direction towards exploration of space for a better understanding of habitable world 1.

The Mars rover Perseverance with its sophisticated robotic system specially designed to collect samples has successfully touched down on the Mars surface at Jezero Crater. This place was once was a water lake that may have nurtured primitive life forms on Mars. The robotic system of the rover will serve as eyes and arms of mankind for exploration on Mars when it is not possible at this juncture to send astronauts. The Mars 2020 Mission will set up a series of missions in future for bringing the collected samples to Earth for analysis 2.

Mars once had a thick atmosphere that retained enough heat for water to remain in liquid state enabling running rivers and lakes on its surface. This suggests that primitive microbial life forms may have existed on Mars. But, unlike Earth, Mars unfortunately does not have a magnetic field to provide protection against powerful solar wind and ionising radiations. As a result, it lost its atmosphere to space in due course and the climate of Mars changed to inhospitable frozen desert with a very thin atmosphere of today 3.

The key brief of this Mars 2020 mission is to search for the signs of ancient microbial life that may have existed on Mars before its climate changed to cold desert. Interestingly, in view of the detection of methane, it is postulated that some primitive life form may be present on Mars even today. However, it requires confirmation because methane may be released from non-living sources as well.

Some of cutting-edge instruments that will play a key role in this are SHERLOC and PIXL. Few others will help the rover to collect data from a distance. It is pertinent to note that the rover has touched down on the Martian surface at Jezero Crater, which was a water lake in the past making it a high potential area to support microbial life forms. The rover is also collecting data about the past climate and geology of Mars.

Not to miss the fact that this Mars mission is not a round trip to Earth. The samples collected by Perseverance will potentially be delivered to a planned lander in future which will bring the samples to the Earth for analysis to condirm the existence of ancient form of life on Mars.

Importantly, Perseverance is carrying several instruments and technologies whose successful use in data collection and exploration on this mission, will pave the way for future missions to the Moon and the Mars 4.

Recent studies have shown the capability of artificial intelligence...