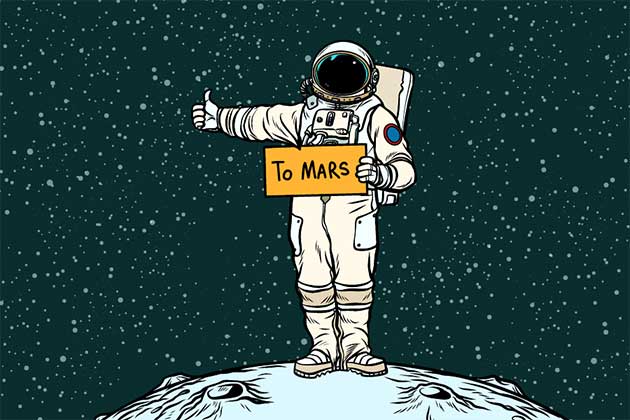 The effects of partial gravity (example on Mars) on our muscular system is still partly understood. Study in rats shows that resveratrol, a compound found in grape skin and red wine, can mitigate muscle impairment in a Mars partial gravity model. This can be beneficial to sustain long-term Mars missions.

The National Aeronautics and Space Administration (NASA) of USA is planning to send astronauts to Moon and Mars. Microgravity is known to affect our body’s muscular system as muscles and bones start to become weak. First, weight-bearing muscles like soleus, located in the calf are affected and then slow-twitch muscle fibers are lost. Mars’s gravitational pull is only 40 percent of Earth’s thus it has a lower gravity of 0.38g. It is still not completely understood how such partial gravity can affect our body. No partial weight-bearing model has been tested until now which can mimic Martian partial gravity. More understanding in this area is critical in order to plan long space missions to Mars and safe return of astronauts to Earth.

A new study published on July 18 in Frontiers of Physiology has used recently developed partial weight-bearing animal models of simulated Mars partial gravity to understand how muscle deconditioning could be addressed on long Mars space missions. To simulate gravity of Mars, rats were fitted with full-body harness and were suspended from their cage ceiling. Divided into two groups, rats were exposed to normal loading (of Earth’s) or 40 percent loading of Mars for 2 weeks. Half the number of rats in each group received either resveratrol (RSV) – a safe polyphenol commonly found in grape skin, red wine and blueberries – in water or only water. The animals fed freely on chow diets.

In Mars condition, rats’ grip weakened and their calf circumference, muscle weight and slow-twitch fiber content got shrunk. Calf circumference and front and rear paw grip force were measured weekly while calf muscles were analyzed after 2 weeks . Results showed that a moderate daily dose (150 mg/kg/day) of resveratrol was seen to preserve muscle mass and strength in animals exposed to the effects of a simulated Mars gravity. RSV helped restore front and rear paw grips and protected muscle mass in Mars rat while having no effect on diet or body weight. RSV is known to have anti-inflammatory, anti-oxidative and anti-diabetic effects. It has been shown to promote muscle growth in diabetic animals by increasing insulin sensitivity and glucose uptake in muscle fibers. Astronauts are thought of developing reduced insulin sensitivity during space missions.

Resveratrol is seen to have a muscle-protective effect as it preserves bone and muscle mass. The current study suggests that resveratrol can help to mitigate muscle impairment in a Mars partial gravity analog which mimics Mars environment. It could be used as a nutritional supplement to reduce muscle and skeletal deconditioning and deterioration on long-term Mars missions.

How Omicron Variant of COVID-19 may have Arisen?

One of unusual and most intriguing feature of heavily...

Probiotics Not Effective Enough in Treating ‘Stomach Flu’ in children

Twin studies show that expensive and popular probiotics may...