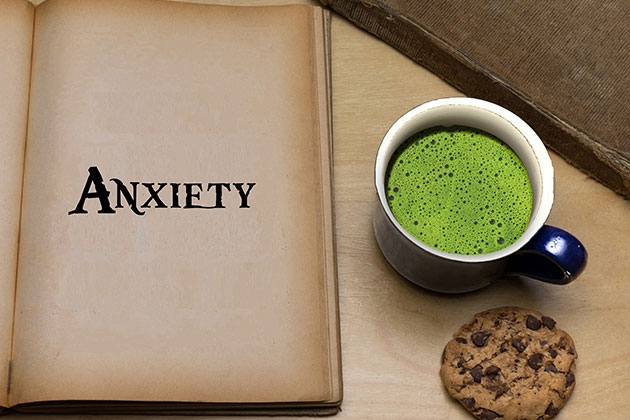 Scientists have demonstrated for the first time effects of Matcha tea powder and extract in reducing anxiety in an animal model. Matcha is a safe, natural alternative to relieve anxiety and elevate mood.

Mood and anxiety disorders are becoming commonplace in our fast-paced and often stressful lives. Anxiety disorders and fear has been linked to disturbance in dopaminergic and serotonergic systems in our brain. Anxiety symptoms also increases risk of other medical disorders and affects overall wellbeing of a person. Anxiolytic (or antianxiety) agents like benzodiazepines and serotonin inhibitors are generally used for treatment as they reduce or inhibit anxiety. However, they have many side effects, sometimes even adverse, and they also increase dependency. Safer, natural alternative need to be developed for anxiety management.

In Japan, ‘Matcha’ has been used since a long time for different medicinal purposes. Matcha is a finely grounded power of new leaves from tree plant called Camellia sinensis which is allowed to grow only in shade. Matcha powder is used for making Matcha tea by adding it directly to hot water. It is also used for adding flavour to food. Matcha tea is different from regular green tea in its content mainly because of differences cultivation and processing. Camellia sinensis plant is rich in L-theanine, epigallocatechin gallate (EGCG), caffeine, vitamins and amino acids and thus consuming Matcha provides several benefits attached to these bioactive substances. It is commonly used in Japan for healing, relaxation and even treatment of skin conditions. However, very limited scientific evidences are available to support the above claims. Also, the effects of Matcha powder on behaviourial aspects has not been explored up till now.

A study published in Journal of Functional Foods has investigated and demonstrated the effects of Matcha tea powder, hot water extract and ethanol extract for antianxiety activity in an animal model (here, mice). Researchers conducted an elevated plus maze (EPM) test in healthy animals. EPM involves use of an elevated plus-shaped platform which has two open arms and two closed arms with walls around it. It is a commonly used anxiety test in which animal subjects which are anxious try to stay on the safe area of the plus where they cannot fall off.

The animals were orally administered Matcha powder and extract or fractions dissolved in water. Results showed that the animals who had consumed Matcha had reduced anxiety. The strongest effect was seen in Matcha extract derived using 80% ethanol when compared to extract derived from hot water. This meant that poor water-solubility of Matcha has better antianxiety effect than when it was easily water soluble. The ethanol extract was fractioned further into hexane soluble, ethyl acetate soluble and water-soluble fractions which exhibited similar results. Behavioural analysis showed that Matcha power and extract reduce anxiety by activating dopamine D1 and serotonin 5-HT1A receptors which are closely linked to anxious behaviour.

The current study conducted on mice demonstrates that Matcha tea powder and extract have a positive calming effect and reduce anxiety by activating dopaminergic and serotonergic systems in the brain. Matcha is a safe and natural alternative for alleviating anxiety.

RNA Technology: from Vaccines against COVID-19 to Treatment of Charcot-Marie-Tooth disease