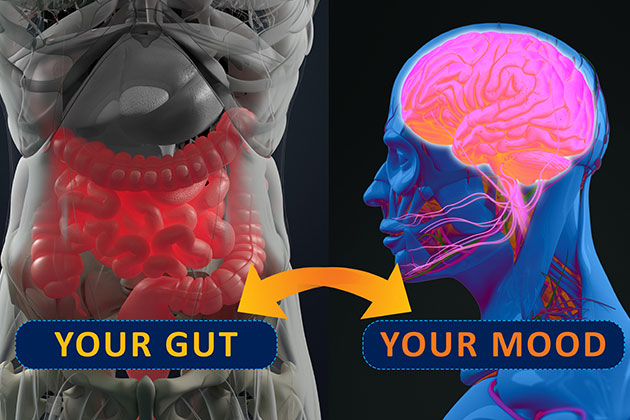 Our gut microbiota – trillions of natural microorganisms in the gut– are known to perform important roles in immunity, metabolism and mental health. Several studies have shown that gut microorganisms can also regulate brain mechanisms. Anxiety – the intense, excessive and persistent worry and fear of events or situations – is common in mental disorders and many physical disorders when stress is involved. Symptoms of anxiety include feeling nervous, tense, increased heart rate and breathing, sweating, insomnia etc. Microbial imbalance of intestinal microbiota has been linked to anxiety though direct evidence of improvement in anxiety symptoms by regulating this microbiota has not been available.

In a new systematic review published on May 17 in BMJ General Psychiatry a team of researchers exclusively reviewed randomized controlled trials on humans published in the past with an aim to investigate evidence that anxiety symptoms could be improved by regulating microorganisms in the intestine. They screened past literature and retrieved 3334 articles from five English and four Chinese databases and shortlisted 21 studies. A systematic evaluation of a total of 21 studies which had collectively analyzed around 1500 individuals was then conducted. The subjects had anxiety symptoms measured on anxiety scales irrespective of their diagnosis. All studies used interventions to regulate intestinal microbiota (IRIFs) which included probiotic supplements or diet alteration. 14 of these studies used probiotics as interventions while remaining used alteration in one’s daily diet. Probiotics are food supplements which contain “good” bacteria that can fight against “harmful” bacteria and perhaps do not allow them to settle in the gut. Alternatively, eating a plant-based diet rich in fiber can increase good bacteria in the gut. The outcome of every study was evaluated by measuring anxiety symptoms using standardized anxiety assessment scales.

Analysis showed that in 11 studies out of 21, an alleviating effect was seen on anxiety symptoms due to regulation of intestinal microbiota indicating effectiveness in almost 52 percent of studies. In 14 studies which used probiotics supplements as intervention, 36 percent studies found regulation to be an effective tool in reducing symptoms. Finally, in 6 out of 7 studies which used non-probiotics interventions, effectiveness was seen to be 86 percent. In 5 studies which used IRIF interventions approach along with regular treatment, only the studies using non-probiotics interventions got positive results indicating that non-probiotic interventions along with IRIF was more effective than IRIF alone. Altering one’s diet may have higher impact on gut bacteria compared to addition of specific types of bacteria consumed through a probiotic supplement. No adverse events were reported in most studies, only mild dry mouth, discomfort or diarrhea.

At least half of the studies evaluated showed that modulating microbiota in intestine could treat anxiety symptoms in patients irrespective of the diagnosis. And, a non-probiotics approach by making suitable diet adjustments was more effective compared to probiotic interventions. For clinical treatment of anxiety, psychiatric drugs are used. Alternatively, when patients are not suitable to recieve such drugs – especially when they have somatic diseases – probiotic or non-probiotic interventions could be possibly used to treat anxiety.

Researchers at Southern Illinois University have reported a new variant of SARS...