Use of Nanowires to Produce Safer and Powerful Batteries 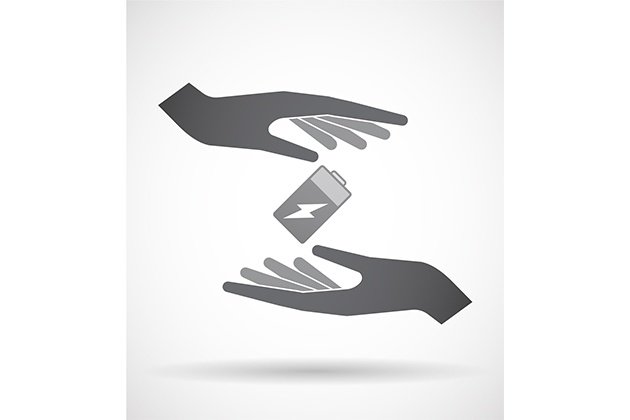 Study has discovered a way to make batteries that we use every day to be more resilient, powerful and safe.

The year is 2018 and our everyday livesare now fuelled by different gadgets which either run on electricity or on batteries. Our reliance on battery-operated gadgets and devices is growing phenomenally. A battery is a device that stores chemical energy that gets converted into electricity. Batteries are likemini chemical reactors having reaction producing electronsfull of energy which flow through the external device.Whether its cell phones or laptops or other even electric vehicles, batteries – generally lithium-ion – is the main power source for these technologies.As technology keeps advancing, there is continuous demand for more compact, high capacity, and safe rechargeable batteries.

Batteries have a long and glorious history. American scientist Benjamin Franklin first used the term “battery” in 1749 while performing experiments with electricity using a set of linked capacitors. Italian physicist Alessandro Volta invented the first battery in1800 when hestacked discs of copper (Cu) and zinc (Zn) separated by cloth soaked in salty water. The lead-acid battery, one of the most enduring and oldest rechargeable batteries was invented in 1859 and is still used in many devices even today including internal combustion engine in vehicles.

Batteries have come a long way and today they come in a range of sizes from large Megawatt sizes, so in theory they are able to store power from solar farms and light up mini cities or they could be as small as the ones used in electronic watches, marvellous isn’t it. In a what is called a primary battery, reaction that produces the flow of electrons is irreversible and eventually when one of its reactants is consumed the battery becomes flat or dies. The most common primary battery is the zinc-carbon battery. These primary batteries were a big problem and the only way to tackle the disposing of such batteries was to find a method in which they could be reused – which means by making them rechargeable. Replacement of batteries with new one was obviously impractical and thus as the batteries became more powerful and big it became nextto impossible not to mention quite expensive to replace them and dispose of them.

Nickel-cadmium battery (NiCd) was the first popular rechargeable batteries which used an alkali as an electrolyte. In 1989 nickel-metal hydrogen batteries (NiMH) were developed having longer life than NiCd batteries.However, they had some drawbacks, mainly that they were very sensitive to overcharging and overheating specially when they were charged say to their maximum rate.Therefore, they had to be charged slowly and carefully to avoid any damage and required longer times to get charged by simpler chargers.

Invented in 1980, Lithium-ion batteries (LIBs) are the most commonly used batteries in consumer electronic devices today. Lithium is one of the lightest elements and it has one of the largest electrochemical potentials, therefore this combination is ideally suited for making batteries. In LIBs, lithium ions move between different electrodes through an electrolyte which is made of salt and organic solvents (in most traditional LIBs). Theoretically, lithium metal is the most electrically positive metal having very high capacity and is the best possible choice for batteries. When LIBs are underdoing recharging, the positively charged lithium ion becomes lithium metal.Thus, LIBs are most popular rechargeable batteries for use in all kinds of portable devices owing to their long life and high capacity. However, one major problem is that the electrolyte can evaporate easily, causing a short-circuit in the battery and this can be a fire hazard. In practice, LIBs are really unstable and inefficient as over time the lithium dispositions become non-uniform.LIBs also have low charge and discharge rates and safety concerns make them unviable for many high power and high capacity machines, example electric and hybrid electric vehicles. LIB has been reported to exhibit good capacity and retention rates at very rare occasions.

Thus, all is not perfect in the world of batteries as in the recent years lot of batteries have been marked as unsafe because they catch fire, are unreliable and sometimes inefficient. Scientists worldwide are in the quest of building batteries which will be small, safely rechargeable, lighter, more resilient and at the same time more powerful.Therefore, the focus has shifted to solid-state electrolytes as the potential alternative. Keeping this as the aimmany options have been tried by scientists, but stability and scalability has been a hurdle of most of the studies. Polymer electrolytes have shown major potential because they are not only stable but also flexible and also inexpensive. Unfortunately,the main issue with such polymer electrolytes is their poor conductivity and mechanical properties.

In a recent study published in ACS Nano Letters, researchers have shown that a battery’s safety and even many other properties can be enhanced by adding nanowires to it, making the battery superior. This team of researchersfrom College of Materials Science and Engineering, Zhejiang University of Technology, China have built upon their previous research where they made magnesium borate nanowires which exhibited good mechanical properties and conductivity. In the current study they checked if this would also be true for batteries when such nanowires are added to a solid-state polymer electrolyte. Solid-state electrolyte was mixed with 5, 10, 15 and 20 weight of magnesium borate nanowires. It was seen that the nanowires increased the conductivity of the solid-state polymer electrolyte which made the batteries more sturdy and resilient when compared to earlier without nanowires. This increase in conductivity was due to the increase in the number of ions passing and moving through the electrolyte and at a much faster rate. The entire set up was like a battery but with added nanowires. This showed a higher rate of performance and increased cycles compared to normal batteries. An important test of inflammability was also performed and it was seen that the battery did not burn. The widely used portable applications of today like mobile phones and laptops need to be upgraded with maximum and most compact stored energy. This obviously increases the risk of violent discharge and it is manageable for such devices because of the small format of batteries needed. But as larger applications of batteries are designed and tried, safety, durability and power assumes supreme importance.

In countries like UK, USA and Italy which are...

A wearable electronic device has been discovered which can...
- Advertisement -
Join Our Facebook Group
100,516FansLike
71,724FollowersFollow
6,462FollowersFollow
31SubscribersSubscribe
ADVERTISEMENT