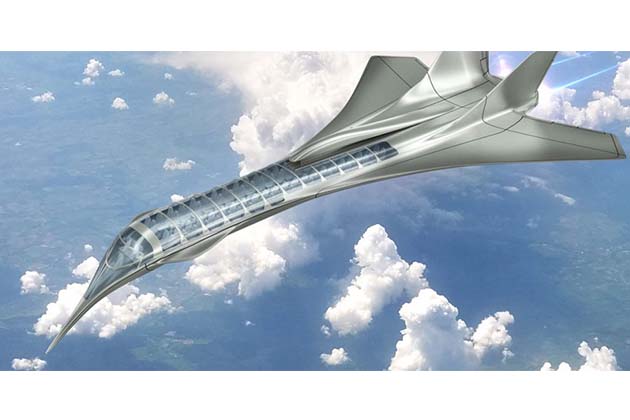 China has successfully tested a hypersonic jet plane which could cut down the travel time by almost one-seventh.

China has designed and tested an ultra-fast aircraft which can achieve hypersonic speeds in the range of Mach 5 to Mach 7, which is about than 3,800 to 5,370 miles per hour. Hypersonic speeds are ‘super’ supersonic (which are Mach 1 and above) speed. Researchers from the Chinese Academy of Sciences, Beijing have successfully tested their “I Plane” (resembling the capital ‘I’ at when viewed from the front and also having an ‘I’ shaped shadow when it flies) inside a wind tunnel at these speeds and they state that such a hypersonic plane would only need a “couple of hours” to travel from Beijing to New York when a commercial airline flight currently takes a minimum of 14 hours to cover this distance of 6,824 miles. When compared with the existing aircraft, Boeing 737, the I Plane’s lift was roughly 25 percent, i.e. if a 737aircraft had an ability to carry up to 20 tonnes, or 200 passengers, the I Plane of the same size could carry 5 tonnes or roughly 50 passengers.The idea of a hypersonic plane being used as a commercialized aircraft has been around for quite a while and the race to be the first to use it has already begun.

This research, published in Science China Physics, Mechanics & Astronomy, has put the topic of hypersonic airplanes back into the limelight. During the testing and aerodynamic evaluations and experimentations, researchers scaled-down the model of the plane inside a specially designed wind tunnel. It was seen that the wings of the I Plane work well together to reduce turbulence and drag while continuously boosting the plane’s overall lift capacity.The lift in airplane terminology is referred to the mechanical aerodynamic force that directly opposes the total weight of an airplane and thus holds the airplane in the air. This lift is generated by every part of the airplane, example in most commercial aircrafts this lift is solely generated by its wings. The lift capacity of an aircraft is very important to keep it steady in the air. And drag and turbulence (caused by heat, jet stream, flying over mountains etc) are basically the aerodynamic forces which oppose and aircraft’s motion in the air. So, the central idea is to maintain a high and steady lift and reduce drag and the effects of turbulence. The authors even pushed the model plan to seven times the speed of sound (343 metres per second, or 767 miles per hour) and to their delight it delivered consistent performance, with high lift and low drag. The design of the aircraft included lower wings that reach out from the middle of the fuselage like a pair of embracing arms. And a third flat, bat-shaped wing meanwhile extends over the back of the aircraft. Thus, owing to this design, the double layer of wings works together to reduce turbulence and drag when at extremely high speeds while increasing the aircraft’s overall lift capacity.

Major countries including China and the United States are also in the process of developing hypersonic weapons and a hypersonic vehiclewhich could be sued by the military as a defence system. This is very confidential and not to say highly debatable because of the unforeseen limits such hypersonic devices could achieve.China is also aiming at a future hypersonic plane which will include a wind tunnel that can produce speeds of up to Mach 36, making it the fastest ever. This can be a game changer and all these developments are really shaking things up in thehypersonic research community.

This study, through its aerodynamic design, has successfully addressed the problems that were faced by previous hypersonic plane models, however the real success would be achieved by moving it ahead from the conceptual stage to a real one.Previous known hypersonic vehicles that have been developed worldwide have gotten stuck at the experimental stage because of the various technological challenges that have existed and in fact still exist. For example, any aircraft travelling at hypersonic speed will generate enormous heat (possibly exceeding 1,000 degrees Celsius) and this heat will need to be either insulated or dispersed efficiently or it could prove fatal for the machine and its carriers. This problem has been suitably addressed many times example by using heat-resistant materials and also an inbuilt liquid-cooling system to thrust the heat out – but all this is technically proven only at the experimental stage.These tests need to move from the wind tunnel to an open field (i.e. experimental setup to a real environment). Nevertheless, this is an exhilarating study and it could pave the path for the future of hypersonic technology.

COVID-19: What Does Confirmation of the Airborne Transmission of SARS-CoV-2 Virus Mean?

There are overwhelming evidences to confirm that the dominant...

A groundbreaking study has discovered a novel way to...