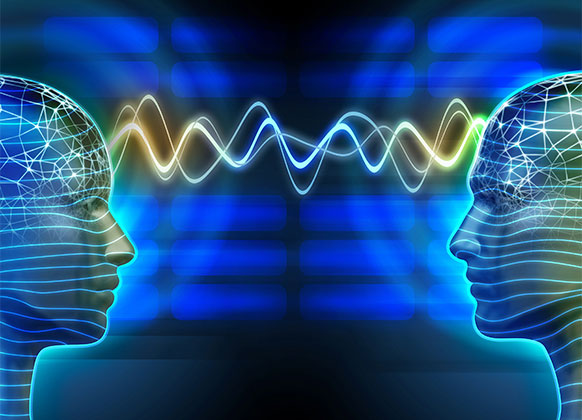 Scientists have demonstrated for the first time a multiple-person ‘brain-to-brain’ interface where three persons collaborated to complete a task via direct ‘brain-to-brain’ communication. This interface called BrainNet paves way for direct collaboration between brains for solving a problem.

A new study published on April 16 in Nature journal Scientific Reports has demonstrated for the very first time a multiple-person brain-to-brain interface – called ‘BrainNet’ – of three persons communicated and solved a task/problem together by using direct brain-to-brain communication. The three participants – Sender 1, Sender 2 and Receiver worked on a collaborative task – a Tetris-like game. All three participants were present in different rooms at all times and there was no communication between them i.e. they cannot see or hear or talk to each other. Both receiver and senders have been provided with ECG and TMS technologies, thus completely removing the need of any physical movements.

In this Tetris-like game, a block is shown on top of the screen and this block needs to put properly at the bottom to fill a line. Sender 1 and Sender 2 could see the game (the block and the line at the bottom) but could not control the game. Receiver who was playing the game and had total control over it could only see the line at the bottom but didn’t know how to reposition the block. To successfully complete the game Receiver had to seek help from Sender 1 and Sender 2 to get the remaining information. This was to be achieved via direct brain-to-brain communication using BrainNet.

At the start of the experiment, the game was displayed to Sender 1 and Sender 2 on a computer screen. They both then decide how the block must be rotated. The screen showed a ‘Yes’ and ‘No’ with LED lights flashing 17 times and 15 seconds per second respectively. When Senders took a decision to ‘rotate or not rotate’ the block, they concentrated or stared on the corresponding light. The lights flashing in a different pattern can trigger unique types of electrical activity in the brain which their ECG head gear recorded. The computer provided real time feedback to display their choice by moving a cursor to the desired choice. This selection is then translated into a ‘Yes or a ‘No’.

Next, the information from the Senders needs to be delivered to Receiver. If the answer was ‘Yes’ (rotate the block), Receiver saw a bright flash of light. Alternatively, when it was ‘No’ the Receiver did not see any light. Senders’s decision is then delivered directly to Receiver brain by Transcranial magentic Stimulation. Then, the Receiver integrates information received from Sender 1 and Sender 2. Receiver also wore ECG head gear, so similar to the Senders, Receiver makes a decision directly from his brain to whether rotate the block or not. Receiver now successfully fills the line at the bottom and completes the game.

A total of 5 groups (having 3 participants each) successfully completed the BrainNet task. In a total 16 rounds of the game, each group filled the line at least 81 percent of the time i.e.in 13 trials. Researchers evaluated the performance of BrainNet by injecting noise through false positives etc. It was seen that Receiver learned to trust the most reliable Sender solely based on the information transmitted to their brain just like how it happens in real life social interactions and communications.

Russia Registers World’s First Vaccine against COVID-19: Can We Have the Safe Vaccine for...