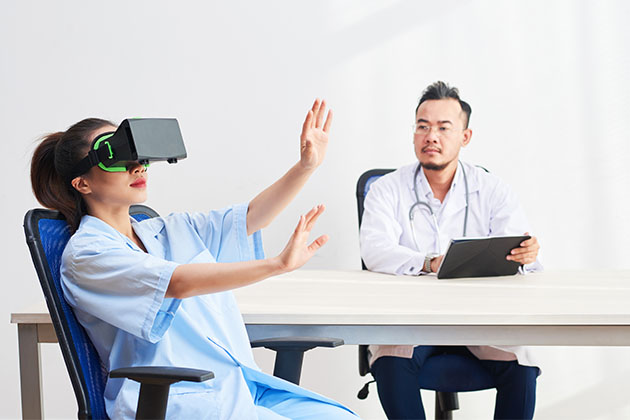 Virtual Reality (VR) is a method in which a person can reexperience the recreations of their difficult circumstances in a virtual environment. This can bring out their symptoms and they can be treated by training them for different responses in order to overcome their difficulties. VR is a fast, powerful and underused tool which could be of potential for patients who are undergoing conventional mental health care treatments. VR would involve a psychological treatment which can be carried outby sitting down on a couch and using a headset, handheld controllers and headphones.

Fear of heights or Acrophobia is a psychological disorder which can cause a person to fear different things related to being far from the ground. This phobia of heights can be mild to severe which could prevent someone of being on a high floor of a building or climbing a ladder or even riding an escalator. Acrophobia is treated by clinical therapists using techniques like psychotherapy, medication, gradual exposure to heights and related methods. In a new study published in Lancet Psychiatry, a large randomized controlled trial of participants clinically diagnosed with fear of heights was conducted to comparea new automated virtual reality treatment with standard care. The aim was to evaluate the effectiveness of automated cognitive intervention using VR for acrophobia.

A Heights Interpretation Questionnaire was completed by all participants which rated their fear of heights on a scale of 16 to 80. Out of total 100 volunteer adult participants, 49 who scored more than a ‘29’ on thisquestionnaire were called the intervention group and they were randomly allocated to automated VR which was delivered in six 30-minute sessions over a period of two weeks. The other 51 participants called control group were given standard care and no VR treatment. The intervention was performed by an animated ‘counsellor’ avatar by using voice and motion capture in VR unlike in real-life where a therapist guides a patient through the treatment. The intervention was focused mainly on guiding patients through ascending a 10-story high-rise building. At every floor of this virtual building, patients were given tasks which would test their fear response and they were helped to learn that they are safe. These tasks included standing closeto safety barriers or riding a mobile platform just above the building atrium. These activities built up on participant’s memories that being at height can mean safe, counteracting their earlier belief that height means fear and being unsafe. Three fear-of-heights assessment was done on all participants at the start of the treatment, immediately at the end of the treatment after 2 weeks and then at a 4-week follow up. No adverse events were reported. Researchers assessed change in participants’ Heights Interpretation Questionnaire score, where a more or increased score indicated greater severity of person’s fear of heights.

Results showedthat patients who received VR treatment displayed a reduced fear of heights towards the end of the experimentand at follow up compared to the control group. So,it could be suggested that automatic psychological intervention delivered via virtual reality can be more effective in reducing a person’s fear of heights in comparison to clinical benefits received via face-to-face personal therapy. Many participants who had more than three decades of acrophobia also responded well to the VR treatment. Overall, fear of heights reduced by two-thirds on an average in the VR group and three-fourth participants now experienced 50percent reduction in their phobia.

Such a fully-automated counselling system can be useful to control acrophobia and can help people to do activities without any fears which they have been unable to, exampleriding a simple escalator or going hiking, walking on rope bridges etc. The therapy offers an alternative and more personalized psychological expertise to patients dealing with mental health problems. Such a technology could bridge the gap for patients who are either not comfortable or do not have the means to speak directly to a therapist.Longer studiesin the future will be helpful todirectly compare VR treatments with real-life therapysessions.

VR therapy can be expensive at first but once suitably created it can be a more cost-effective and powerful option in the long-term. VR could help design psychological treatment for other phobias like anxiety or paranoia and other mental disorders. Experts from the field suggest that training with real therapists will still be required for patients with severe symptoms. This study is a first step in using VR for treating a psychological disorder.

The scientists have developed a suitable material for use...

The bird is native to Asia and Africa and...
- Advertisement -
Join Our Facebook Group
100,477FansLike
71,803FollowersFollow
6,458FollowersFollow
31SubscribersSubscribe
ADVERTISEMENT