Influence of Gut Bacteria on Depression and Mental Health 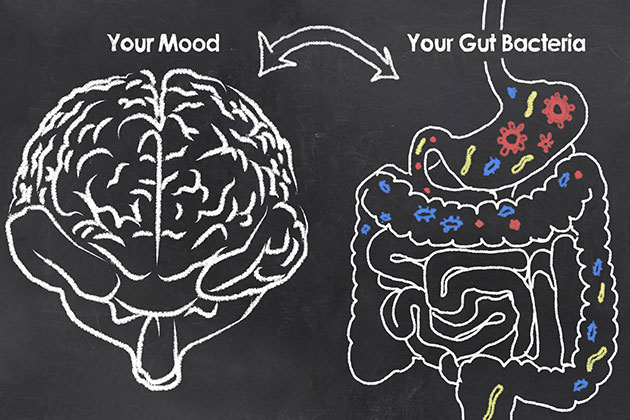 Our gastrointestinal (GI) track has a trillion of microorganisms. The microbes which reside in our gut perform important functions and are thought to influence our health by having an impact on diseases like obesity, diabetes and cancer. As researchers are now beginning to better understand this influence at the cellular and molecular level, it is being revealed that abnormal balance of gut bacteria can cause our immune system to overreact and contribute towards inflammation in the GI tract.This can lead to various illnesses throughout the body. In two recent studies1,2, researchers have sequenced the DNA of more than 100 new species of gut microbes making it the most comprehensive list of human gut bacteria up till now. Such a list can be utilized for extensive research on effects of different gut bacteria on human health.

Finding the link between gut microbes and mental health

Research community is intrigued by the possible association of gut microbial metabolism and a person’s mental health and wellbeing. It’s interesting that microbial metabolites could interact with our brain and affect our feelings or behaviour by playing a role in neurological systems. This association has been studied in animal models but not sufficiently in humans. In a first every population study3 published in Nature Microbiology, scientists aimed to unravel the exact nature of the relationship between gut bacteria found in human gastrointestinal tract and mental health by gathering evidences that gut bacteria can produce neuroactive compounds.They combined faecal microbiome data with general practitioner diagnose records of depression of around 1100 individuals who were part of the Flemish Gut Flora Project. Mental wellbeing was assessed using different ways including medical tests, doctor diagnoses and self-reporting by participants. By analysing this data,they identified the microorganisms which could have a potential positive or negative impact on mental health.

They showed that two bacterial groups Coprococcus and Dialister were seen to be in consistently low amounts in individuals suffering from depression, whether they were taking antidepressants as a treatment or not. And Faecalibacterium and Coprococcusbacteria were seen to be commonly present in individualswho had a higher quality of life and better mental health.The results were validated in two independent cohort studies, a first consisting of 1,063 individuals who were part of Dutch LifeLinesDEEP and second was a study of patients at University Hospitals Leuven, Belgium who were clinically diagnosed with depression. In one observation, microorganisms could produce DOPAC, a metabolite of human neurotransmitters like dopamine and serotonin which are known to communicate with brain and are linked to better mental health quality.

A bioinformatics technique was designed which identified exact gut bacteriathat interact with the human nervous system. Researchers utilized genomes of more than 500 bacteria in the microorganism’s ability to produce neuroactive compounds in the human gut. This is a first comprehensive catalogue of neuroactivity in the gut which furthers our understanding about how gut microbes participate in producing, degrading or modifying molecules. Computational results will need testing to bolster the claimsbut they do expand our understanding of interactions between human microbiome and the brain.

At the time of initiating their study, researchers presumed that one’s mental health might be having an impact on the microorganisms which can thrive in the gut and not the other way around. However, this study provided evidences that gut microbes do ‘interact’ in some way with our nervous system by producing neurotransmitters which are critical for good mental health. It is important to note that microorganisms which exist outside our body, example in the environment,are not capable of making similar neurotransmitters so microorganisms might have evolved.This is a first major studyconducted on a large scale in individuals living invaried geographical locations. It can be suggested that clinical approach to mental health can also incorporate probiotics as a new way of treatment to boost ‘good’ bacteria in our intestines. The study needs to be first tested in animal models where specific bacteria would be cultured and subsequently animal’s behaviour will be analysed. If strong linksare established, human trials could be conducted.

Scientists have for the very first time bioengineered a...