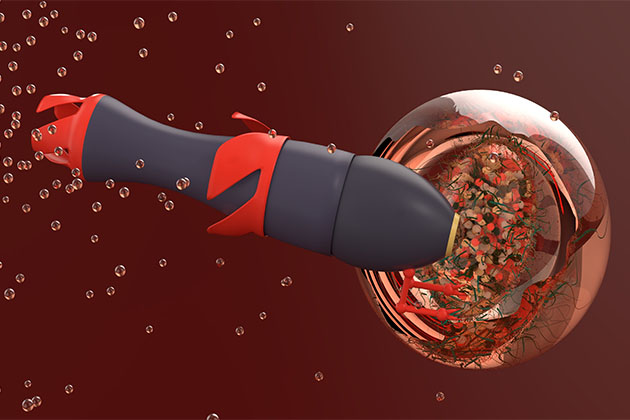 For the first time nanorobots have been designed which can deliver drugs directly into the eyes without causing damage.

Nanorobot technology is a recent technique at the centre of focus of scientists for treating multiple diseases. Nanorobots (also called nanobots) are tiny devices made from nanoscale components and are of size 0.1-10 micrometres. Nanorobots have the potential of delivering drugs into the human body in a very targeted and precise manner. Nanorobots are designed or engineered in such a way that they are ‘attracted’ to diseased cells only and thus they can make a targeted or direct treatment in those cells without causing any damage to healthy cells. Generally, for most diseases such a targeted drug delivery may not be essentially required, however for complicated illnesses such as diabetes or cancer it can be very beneficial.

Retinal diseases of the eye

The treatment of eye diseases is generally geared towards reducing inflammation in the eye, repair traumatic injuries and protecting or improving eyesight. A healthy retina – the thin layer of tissue at back of the eye – is critical for good vision. Our retina consists of millions of light-sensitive cells (called rods and cones) and nerve fibres/cells which allow light that enters the eye to be converted into electrical impulses to reach the brain. This is how visual information is received and processed by our eye and sent to the brain through the optic nerve. The whole process enables vision and controls how we see images. Retinal diseases of the eye affect any part of retina. Few forms of treatment are available for some retinal diseases, but they are quite complex. The aim of any treatment is to completely halt or slow the eye disease and to protect vision (preserve, improve or restore it). It is crucial to detect retinal problems early because the damage is irreversible. If left untreated, some retinal diseases can cause vision loss or blindness.

It is extremely difficult to treat diseases affecting retina because it is very challenging to deliver targeted drugs through the dense biological tissue present in eye. Though eye tissues are mostly composed of water but they consist of viscous eye ball and a dense network of molecules (hyaluronan and collagen) which cannot be penetrated easily by particles as these both are very strong barriers. A great deal of precision is required to make a targeted drug delivery to the eye. This is the reason that traditional methods which have been used to deliver drugs to eyes have mainly relied on random and passive diffusion of molecules and these methods are not suited for delivering medicines to the posterior of the eye.

Researchers at Max Planck Institute for Intelligent Systems in Stuttgart along with a team have developed nanorobots (‘vehicles’) which can for the very first time go through the dense eye tissue. These nanorobots were made using a vacuum-based technique in which silica-based nanoparticles were patterned on a wafer which were then placed inside a vacuum chamber at a particular angle while depositing silica material like iron or nickel. The shadowing caused by a shallow angle makes sure the material only deposits on nanoparticles which then assume helical propeller structure. These nanorobots are about 500nm wide and 2 μm in length, magnetic in nature and shaped like micro propellers. This size is about 200 times smaller than the diameter of a single strand of human hair. The nanorobots are then coated with a non-stick bio liquid layer on the outside to prevent any adherence between the nanorobot and biological protein network in the eye tissue when nanorobots are navigating through it. The optimal size of nanorobots makes sure that they slip through the mesh of biological polymeric network without damaging the sensitive eye tissue. These amazing nanorobots can be loaded with drugs or medicines and can be navigated cm by cm and targeted to a particular area in the eye by use of magnetic fields in real time.

Scientists injected thousands of nanorobots into a pig eye using a needle and applied magnetic field just aptly to stir the nanorobots towards the retina of the eye in a total duration of 30 minutes starting from injection. They constantly monitored the path taken by the nanorobot using an imaging technique which is commonly used in diagnosing eye diseases. This technique is unique and minimally invasive. Though it has been shown so far only in model systems or fluids. Scientists hope that in the near future this technique will be used to load nanorobots with appropriate therapeutics and they will reach other soft dense tissues in unreachable parts of the human body. The field of nanomedicine – use of nanorobots for therapy – has been gaining a lot of attention in the past several years and many different types of nanorobots are being developed, some using 3D manufacturing process. Interestingly, almost a billion nanorobots can be developed in a few hours by vaporizing silicon dioxide and other materials like iron onto a silico wafer under high vacuum conditions.

The researchers have studied the turbulence in Sun’s corona...

Gravitational wave was directly detected for the first time in...