Nanorobotics – A Smarter and Targeted Way to Attack Cancer 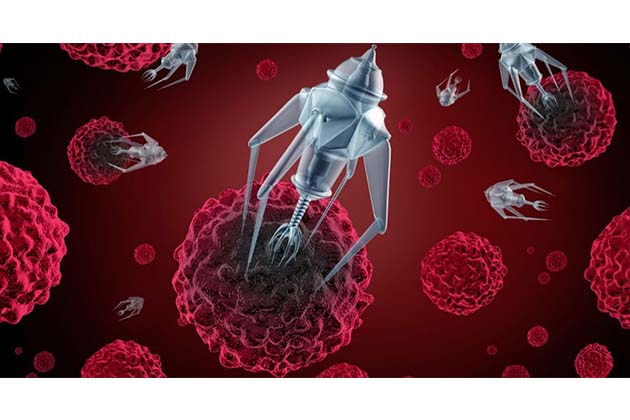 In a recent study, researchers have developed for the first time a fully autonomous nanorobotic system for specifically targeting cancer

In a major advancement in nanomedicine, the field that combines nanotechnology with medicine, researchers have developed novel avenues of therapeutic treatment using very small, molecule-sized nanoparticles (machine or robots which are close to the microscopic scale of a nanometer 10-9m) to target cancer, in this remarkable study published in Nature Biotechnology.

DNA origami is a process in which a DNA is folded in a nanoscale level and is used to build active structures at the tiniest scales (origami as in the art of paper folding). DNA is a great storage of information and thus structures which are built out of it can be used as information carriers. In line with this capability, these DNA nanoparticles (or ‘DNA nanorobots’ or ‘nanorobots’ or simply ‘nanobots’) can move and lift cargo at the smallest scales for specific tasks in the human body and thus are suitable for many nanorobotic applications.The size of such a nanobot is 1000 times smaller than a single strand of human hair. This field of nanorobotics has been full of excitement for the past two decades and many experts have been focusing on developing such nanoscale structures based out on DNA which can fold themselves into all sorts of shapes and sizes to revolutionize medicine especially therapy and drug delivery.

Nanorobot technology is now being widely used and has already revolutionised fields like medical imaging, devices, sensors, energy systems and also medicine. In medicine, nanobotshave significant advantages mainly because they do not generate any harmful activities, have no possible side effect and are are very specific in which site in the body will they target and operate on. The initial cost of development of nanorobots maybe high but the manufacturing when done by the conventional method of batch processing reduces the cost to a great extent.Further, the miniscule size of the nanorobots make them ideal for targeting bacteria and viruses. Also, a tiny nanorobot can be injected very easily into the body and it easily floats through the blood (the circulatory system)and helps in detecting the problems and treating them. Nanobots have gained a lot of significance in cancer research since they can be a painless alternative of chemotherapy which is otherwise very stressful and puts a huge personal and financial burden on the patient. Chemotherapy is not only aharsh way of treating cancer, but aside from attacking the cancer cells, the procedure leaves several side effects throughout the body. Yet science has not been able to discover any new alternative to chemotherapy for treating this life-threatening disease called cancer. Nanobots have the potential to change this scenario in the coming years by being a more efficient, smarter and targeted alternative attacking cancer.

In this recent study, a collaboration between Arizona State University, USA, and National Centre for Nano science and Technology of the Chinese Academy of Sciences, Beijing, researchers have successfully designed, built and carefully controlled automated nanobots to actively seek and precisely destroy cancerous tumours inside the body – while not harming any of the healthy cells. They overcame several challenges that have been plaguing nano scientists for over two decades, by designing and using a very simple and straightforward strategy to seek and destroy the tumour. The strategy was to specifically cut-off the blood supply in a tumour cell by inducing blood coagulation into the tumour cell using DNA-based nanobots. So, they thought of something seemingly simple – attach a key blood-clotting enzyme (called Thrombin) to the surface of the flat, nanoscaled DNA origami nanobot. An average four molecules of Thrombin were attached to the flat surface of the DNA origami sheet of size 90nm by 60nm. This flat sheet was folded like a sheet of paper making the nanobots mould into the shape of a hollow tube. These nanobots were injected into a mouse (which had been induced with aggressive tumour growth), they travelled throughout the bloodstream reaching and binding to its target – the tumours.Subsequently, nanobot’s cargo – enzyme Thrombin – gets delivered thereby blocking the tumour blood flow leading to clotting of blood within the vessels which feed tumour growth, generatingthe destruction of the tumour tissue or cell death. This entire process, interestingly happens very swiftly and the nanobots surround the tumour within hours of the injection. Evidence of advanced thrombosis, in all tumour cells was observed after 36 hours of injection.

Further, the authors also took care of including a special payload on the surface of the nanobot (called a DNA aptamer) which would specifically target a protein, called nucleolin, which is made in high amounts only on the surface of tumour cells, thus reducing the chances of nanobots ever attacking the healthy cells to zero.These nanobots not only reduced and killed the tumour cells but also prevented metastasis – secondary cancerous growth at a distant site.

The authors stress that nanobots are safe and immunologically inert for use in mice and even pigs and the use of nanobots showed no changes in normal blood coagulation elsewhere or cell structure or any breechinto the brain. Thus, they have been designated as safe and effective towards targeting and shrinking tumours without anypossible unwanted side effects. Most of the nanobots were also seen to be degrading and clearing from the body after 24 hours. Though the nanobots could be designed in a ‘replicating nanobots’model, which is understandable to keep the costs down as a few copies are made and other nanobots are self-generated, it is clear that such an approach should only be applied in special circumstances. As far as the field of medicine is concerned,a foolproof kill-switchalso needs to be in place so as to keep any extreme circumstances at bay.Legal authorities need to devise regulations to avoid any misuse of nanobots in medicine, for example weaponized nanobots. All the factors when weighed in, the efficacy of nanobots brings us to a point that they cannot be overlooked and looking at their potential nanobots will be an essential component of medicine in the future.

A similar approach could be used on humans as the authors have shown that this system was also tested on a primary mouse lung cancer model – which mimics the human clinical course of lung cancer patients- and showed regression oftumour after a two-week treatment. Also, these studies were conducted on mice, and within two weeks a similar demonstrable effect on breast cancers, melanoma, ovarian and lung cancer was seen in the animals. The study, however needs to be done in humans to confirm the plausibility of similar results and robust clinical trials needs to be carried out for achieving the same.

A very smart and targeted way to attack cancer

One of the major challenges of cancer therapeutics is to carefully and correctly differentiate between the cancer tumour cells and the normal, healthy body cells. The conventional approach to shirking and killing tumour cells – chemotherapy and radiation therapy– fails to target the tumour cells selectively without interacting with the normal body cells. Thus,chemotherapy and also radiation therapy tend to cause serious side effects, both minor and major, including organ damage which results in a very impaired treatment of cancer and thus low survival rates among patients. Nanobots such as the ones described in this study are first-of-its-kind in mammals that are very strong and effective in identifying tumour cells and diminishing their growth and proliferation. This DNA robotic system can be used for precise and targeted cancer therapy for many types of cancer, since all solid tumour feeding blood vessels are essentially same.

This research has paved the way for future to start thinking and planning practical medical solutions using technological advances. The ultimate goal of cancer research is the successful eradication of solid tumours, with no grave side-effects and reduced metastasis. Looking at this study, we see immense hope for the future where this current strategy could be ideal for accomplishing the ultimate goal to tackle cancer. And not only cancer, this strategy could also be developed as a drug delivery platform for treatment of many other diseases too because the approach would be simply modifying the structure of nanobots and altering loaded cargos. Also, nanobots can help us to further understand the complexity of the human body and brain. This will also help in performing painless and non-invasive surgeries, even the most complicated ones.Hypothetically at this point, owing to their size nanobots could also surf through the brain cells and generate all the related information required for further research. In future, let’s say two decades from now, a single injection of a nanobot might be able to completely cure diseases.

Li S et al 2018. A DNA nanorobot functions as a cancer therapeutic in response to a molecular trigger in vivo. Nature Biotechnology. https://doi.org/10.1038/nbt.4071

Use of nasal gel as a novel means to...