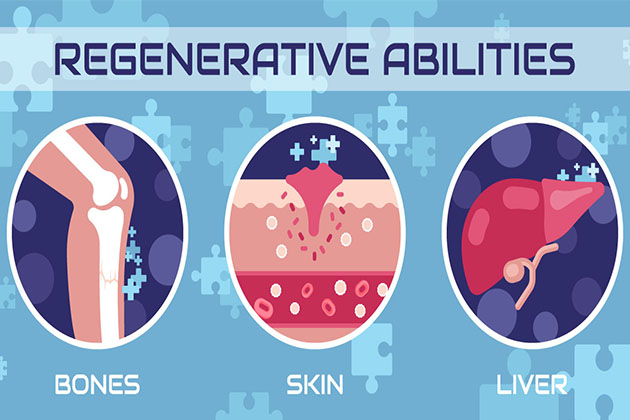 Adult frogs have been shown for the first time to regrow amputated legs marking it as a breakthrough for organ regeneration.

Regeneration means re-growing a damaged or missing part of an organ from residual tissue. Adult humans can successfully regenerate some organs like liver and especially skin which is regularly renewed and repaired but unfortunately human tissues of most organs do not have the ability to regenerate. The field of regenerative medicine aims to find ways to retrigger regeneration of tissues in our body. The ideal solution would be to set in motion important pathways which can restore a tissue, example a limb, from its own cells, however, it is not a straightforward case as scientists are still trying to understand the nuances of tissue regeneration.

In a study published in Cell Reports, scientists from Tuft University USA aimed to understand tissue regeneration capacity and how cells cooperate and form a three-dimensional organ. They chose to reproduce tissue growth in an animal which normally does not regenerate and they chose an amphibian – adult aquatic African clawed frog (Xenopus laevis) – a commonly used laboratory animal in research. Amphibians have very limited tissue renewal capacity similar to humans. Scientists successfully designed a device which retriggers tissue generation at the amputation site and enables to partially regenerate a hindlimb in adult Xenopus frog.

First, a wearable bioreactor was printed in 3D in silicon and it was filled with hydrogel. Next, hydrating silk proteins were placed on this hydrogel polymer which are known to promote healing and regeneration. The hormone progesterone – a neurosteroid – was added which is generally known to be involved in menstruation, pregnancy and breastfeeding. Progesterone is also involved in promoting repair of nerve blood vessel and other tissue. The frogs were divided into experimental, control and sham groups. In control and sham groups bioreactor device was sutured into the frogs instantly following the limb amputation. In experimental group progesterone was released by the bioreactor onto the amputation site. The devices were removed after 24 hours. The frogs were then routinely observed for several months. Frogs in control and sham groups developed a thin, cartilaginous spike at the amputation site which is normal when tissue regeneration progresses unaided. It was seen only in frogs of experimental group that bioreactor device triggered bigger limb regeneration and frogs regrew a more structured paddle-shaped appendage close to an almost fully formed limb. This was indicative of an aided tissue regeneration. The visible difference was noticeable within few weeks itself suggesting that the bioreactor device created a support environment around the wound to enable tissue to grow – similar to how tissues would grow in an embryo inside the uterus. Just a brief delivery of progesterone from the bioreactor (placed only for 24 hours) had triggered growth of soft tissue and bone over course of several months. Upon histology analysis and molecular inspection of the regenerated structures it was revealed that these limbs were thicker and had more developed bones, innervation and vascularization. The animals treated with progesterone were also more active than control and sham groups.

The growth of limbs stopped after about six months but it did lead to under typical growth of fingers and toes. The regrown limbs had good bone volume and density, main blood vessels, well-set nerves and these frogs could even swim similar to how normal unamputated frogs would using their native limbs. RNA sequencing and transcriptome analysis showed that gene expression in the cells at the amputation site was modified by the bioreactor. So, genes related to oxidative stress and white blood cells activity were active (upregulated) and some others were downregulated. The scarring and immune response was also reduced thus allowing for regeneration to proceed by weakening the body’s natural response to injury which would have otherwise hampered the regeneration process.

This study is based upon the logic of defining a kickstart or trigger program which would lead way to a long-term growth. It can be called as a new model of cell-stimulation. Earlier studies have shown that mice can partially regenerate amputated fingertips under normal circumstances but because they are not aquatic and there is no water to protect them, so unlike amphibians the process in mice was not efficient because sensitive regenerated cells were subjected to hard surfaces again and again. The regeneration approach in a vertebrate animal should be applicable to mammals and to human body and maybe very soon in the future we could regenerate complex organs which could be used for organ transplant or any kinds of injuries maybe even cancer.

''However difficult life may seem, there is always something...

WHO has updated its living guidelines on COVID-19 therapeutics....

Researchers have identified a group of cells in the...
- Advertisement -
Join Our Facebook Group
100,452FansLike
71,737FollowersFollow
7,959FollowersFollow
31SubscribersSubscribe
ADVERTISEMENT