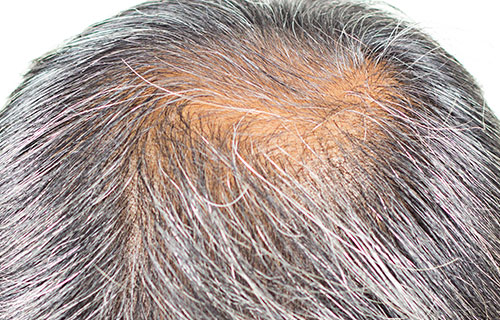 Researchers have identified a group of cells in the hair follicles of mice which are important both in forming the hair shaft to allow hair growth, and also in maintaining hair colour in a study aimed at identifying possible treatments for hair greying and balding

Hair loss in humans is caused by a variety of reasons including genetics, thyroid problems, hormonal chances, cancer treatment (chemotherapy), as side effect of medications and/or other health conditions. Though hair loss is more common in men, anyone can experience hair loss due to any of these underlying conditions. Hair loss or hair thinning is devastating to anyone, men or women, and it can directly result in low self-esteem, anxiety, depression and/or other emotional issues. Why this happens is mostly related to culture and societal norms. Since luxurious hair is associated with youth, beauty and good health. And so, for most people, whether male or female, their hair gives them confidence and makes them look and feel beautiful. Baldness in men occurs when there is excessive hair loss from one’s scalp. The most common reason for this is the hereditary hair loss with age and this kind of baldness does not have a “cure” yet. Some people accept it and they cover or camouflage is by hairstyles, hats, scarves etc. However, everyone is looking for a magic solution which can help cure this problem of hair loss.

Few possible treatments for hair loss are available. Researchers have claimed that hair loss might be reversible or at least the thinning of hair might be slowed down in cases in which complete hair loss has not taken place. Treatments including medications and even surgery have been proposed to slow down hair loss and promote hair growth. For conditions like patchy hair loss (which is caused due to a genetic condition called alopecia areata) it is being claimed that hair may regrow completely within a year of the treatment. Some of these treatments are carried out unlicensed and they tend to put the patient on risk. Most of these treatments are ineffective after the first round of treatment, i.e. once successful, the patient’s condition reverts back to the original in no time, leading to the patients repeating the same treatment over and over. Scientists worldwide are trying to understand the root cause of hair loss and also hair greying for a very long time to come up with a solution which not only can suit everyone but will also have minimal side effects.

A hopeful study conducted at UT Southwestern University, USA, researchers have learned the reason behind our hair turning grey and they have also identified exactly which cells directly give rise to hair. The project was initially aimed at trying to understand various forms of tumours in humans by studying a rare genetic condition called neurofibromatosis in mice which causes benign tumours to develop on covering or sheath of nerves. However, the study took a turn and researchers instead discovered the role of a protein called KROX20 in hair colour which then led to this unique finding.

Understanding greying of hair and baldness

The protein KROX20 (also termed EGR2) has been more commonly associated with nerve development. While performing experiments researchers saw the occurrence of full grey fur on one mice which then led them to further probe the possible role of this protein in hair growth and pigmentation. The protein KROX20 ‘became’ skin cells which then ‘become’ the hair shaft from where the hair originates making it clear that KROX20 protein had a prominent role. These hair precursor cells produce a protein called stem cell factor (SCF) which is essential for hair pigmentation and is thus responsible for greying of hair because pigmented hair means the hair has lost its colour. When this SCF gene in the hair precursor cells was deleted in mice, their coats lost their colour because no new pigment (melanin) was being deposited into the hair as it grew. This process started early on in the mice’s lives and the animal’s hair turned white starting from 30 days and then after nine months all their hair was white. Further, if KROX20-producing cells were removed then mice grew no hair and they became bald. These two tests fully explained the important genes needed for both hair growth and its colour. Though these two theories are already known to be involved in hair making and pigmentation but the unknown aspect discovered in this study was the detailed account of what happens when the stem cells move down to the base of the hair follicles, which cells in the hair follicles produce SCF and which cells eventually make the KROX20 protein. The exact cells and their details have been formulated for the first time in this study published in Genes and Development. It is clear that cells with functioning KROX20 and SCF move up the base of the hair follicle and interact with pigment-producing melanocyte cells and then eventually grow into pigmented (mature pigment = colour) hair. The study was aimed at better understanding the identities of progenitor cells in the matrix and the mechanisms by which they regulate hair shaft components.

Study ageing and finding a cure of baldness

This revelation can be used to further study ageing causes people to start getting grey hairs, why hair thinning is usually seen in older people and the ultimate – male pattern baldness which is genetic. If the root cause of greying hair is known, can loss of hair colour be stopped and if its already happened can it be reversed and how. This research has definitely achieved a very detailed understanding of an important biological process which can help to figure out ways to stop, alter or correct a problem. The study itself is at a very early stage and the current work done in mice needs to be extended to humans before design of treatments can begin. Authors state that this study has brought upon enough knowledge to be able to address the problem of hair loss and hair greying. They suggest that a topical compound (a cream or an ointment) can be created which can safely deliver the necessary gene to the hair follicles to rectify the problems.

Treatment of Paralysis Using a Novel Method of Neurotechnology

Study had shown recovery from paralysis using a novel...

For the first time nanorobots have been designed which...