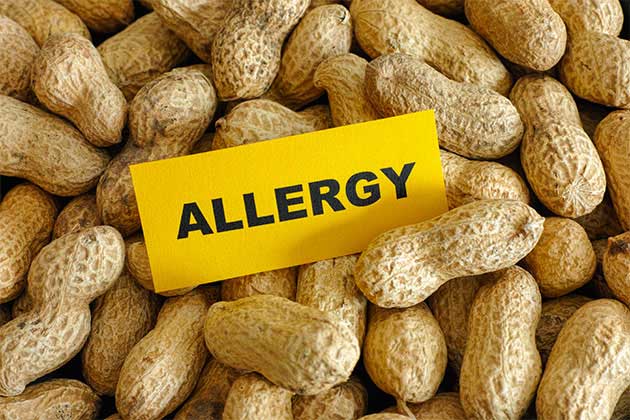 Peanut allergy, one of the most common food allergies, is when our immune system identifies peanut protein to be harmful. Peanut allergy is most common in children in industrialized countries. Even slight off chance exposure to trace amounts of peanuts in confectionaries or other food items can cause allergic reaction and even sometimes hospitalization. In more than 30 percent cases severe allergic reaction occurs such as anaphylaxis. There is no cure for peanut allergy and also no treatment options have been approved till date. If at all any treatment for peanut allergy is approved, it is to be only prescribed to the patient by a doctor and the patient will need to continue to use the treatment to be able to stay protected from any accidental consumption of peanut at any given time in their life. Such a treatment is also no longer effective once the prescription is stopped. People who have peanut allergy need to remain vigilant throughout their lives and this is very difficult to cope with especially for children.

A study has shown for the first time that it may be possible for persons with peanut allergy to get protection from unintentional intake of peanut by desensitizing themselves to the allergy gradually over time. This is done by building up one’s tolerance level to peanut via a controlled incremental exposure to the allergic substance which otherwise can cause a serious reaction. The method is based upon the principle of immunotherapy and aims to build one’s immune system’s tolerance to an allergen, in this case peanut.

The systematic study published in New England Journal of Medicine was conducted on 551 participants of 4 to 55 years age group who had peanut allergy and they were given the experimental drug for a year. This drug called AR101 is a protein powder derived from peanut and is developed by Aimmune Therapeutics Inc. USA. The total number of participants in this study were high and also additional detailed data analysis has been done compared to all prior studies combined. One third participants were given a placebo (i.e. no peanut at all) and others were given peanut protein powder (from peanut flour) slowly in incremental manner until a dose (equivalent of one peanut daily) was reached which was then maintained till the end of the study. Almost 80 percent participants reached this ‘maintenance’ dose, which was then given up till six months. The peanut protein was part of the ‘oral food challenge’ considered the gold standard in testing for food allergy.

At the end of the study, participants were able to tolerate 100-fold higher dosage of peanut compared to when they started. During the study, symptoms were also seen to be mild even for higher dosage compared to symptoms for a lower dosage at the start of the study. Two-thirds of participants could now tolerate an equivalent of daily two peanuts and after 9-12 months the tolerance level of half of the participants went up to equivalent of four peanuts daily. Best results were seen in the age group of 4-17 years i.e. children and adolescents. Only a meagre 6 percent dropped out due to gastrointestinal/ skin/ respiratory etc. side effects and one-third patients had very mild negligible side effects. All 372 children did suffer allergic reaction, though only less than five percent were severe. Severe reaction effects were seen in 14 percent of children which would require the drug epinephrine – a powerful hormone – to control.

This type of oral immunotherapy treatment may not work for everyone who has peanut allergy and a major drawback of the study which authors point out is that it may be difficult to predict who can or who cannot use this treatment. Nevertheless, this study suggests that a robust treatment can be available in the near future where people who have peanut allergy and who can tolerate this treatment (i.e. tolerate one peanut a day) may be able to tolerate two peanuts and thus could get protection from accidental consumption which leads to life-threatening reactions. The regime from this study has to be followed only under expert supervision and the goal is not for everyone to consume large quantities but rather be able to tolerate small amounts of peanut which can improve their quality of life.

Peanut allergy is a serious problem especially among children and adolescents and this group can be protected from accidental or unintentional consumption of food containing peanut. The drug AR101 looks promising to reduce frequency and severity of allergic reactions to peanut and thus appears beneficial. Understanding food allergy is key to designing strategies for prevention of severe allergic reactions and also for correct application of oral immunotherapy approach. If this meets success, similar approach can be used for other common allergies example from egg.

Scientists have used an algorithm to plot huge data...

In a major advancement in cancer screening, new study...

Humans and Viruses: A Brief History of Their Complex Relationship And Implications for COVID-19

Humans would not have existed without viruses because viral...
- Advertisement -
Join Our Facebook Group
100,521FansLike
71,746FollowersFollow
6,463FollowersFollow
31SubscribersSubscribe
ADVERTISEMENT