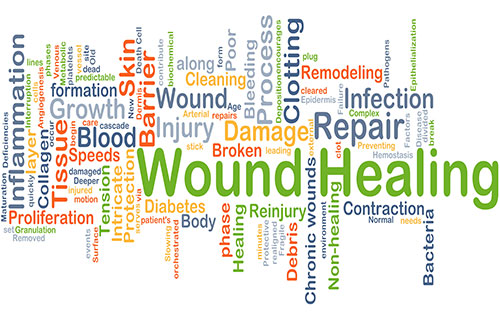 Scientists discovered a very important aspect of wound healing in the late 1970s when the understanding of this process was at a very early stage. It was seen that any wounds which were incurred in a baby before the seventh month of pregnancy left no scars and there is fast scar less healing in early development of foetuses. This led the researchers to try and recreate or replicate these unique properties of the foetal skin which could be the used for regenerative medicine. The foetal skin is known to have very high levels of a protein called fibronectin. This protein fibronectin generally assembles into an extracellular matrix which in turn helps or rather promotes cell binding and adhesion. What is unique is that this property is very exclusive to foetal skin and is not found in adult cells. To elaborate this property further, fibronectin protein has two unique structures globular and fibrous. The globular structure i.e. the one spherical in shape is found in blood, while tissues in the body are fibrous. Fibronectins have always been seen as potential good candidates for wound healing but manufacturing fibrous fibronectins has remained a challenge so far.In dual studies published recently, researchers have provided insights into two different types of nanofiber dressings which use naturally-occurring proteins in plants and animals. These dressings are touted as very efficient in healing and re growing tissue in a wound. These current studies have pioneered the possibility of creating and developing nanofibers for wound healing. The whole idea of the authors was to creating dressings with the aim of developing therapeutics for wounds, especiallythose inflicted during war. The healing of such wounds is a painful process and is underserved by the wound therapeutics currently available.

In the first study published in Biomaterials, researchers from Harvard John A. Paulson School of Engineering and Applied Sciences (SEAS) and the Wyss Institute for Biologically Inspired Engineering have manufactured fibrous fibronectin on a platform called Rotary Jet-Spinning (RJS), developed in house1. They have described a wound dressing by using foetal tissue. The 2-step process was straightforward in which first a liquid polymer solution (here, globular fibronectin dissolved in a solvent) is loaded into a reservoir and is thrusted into a tiny opening by a centrifugal force as this machine spins. When this solution leaves the reservoir, the solvent evaporates and the polymers solidify. This strong centrifugal force unfolds the globular fibronectin into small, thin fibres (less than one micrometre in diameter). These fibres can be collected makewound dressing or bandages. Testing in animals showed that wounds treated with this new fibronectin dressing showed 84 percent restoration of skin tissue withinonly 20 days, while the normal dressingsrestored 55.6 percent.The working of this dressing has been well explained. The dressing integrates into the wound and acts like an instructive scaffold which then allows different stem cells to carry out the necessary regeneration and assistance for the healing process of tissues in the wound. The material is eventually absorbed by the body. The wounds treated with this fibronectin dressing have very normal epidermal thickness and also dermal architecture. Even the hair was regrown in the area of the wound after it was healed. This is a big achievement because hair regrowth has remained one of the main challenges in the field of wound healing. When compared to standard processes of skin regeneration, this procedure efficiently repaired tissue and also regenerated hair follicle using the capability of just one material. Obviously, such an approach has significant advantages for translating the research into actual use. These fibronectin dressings can be apt and useful for small wounds, especially on face and hands where its important to prevent any scarring.

In their second study published in Advanced Healthcare Materials, researchers developed a soy-based nanofiber which promoted wound healing2. Soy protein contains,firstly, estrogen-like molecules (which are proven to accelerate wound healing) and secondly, bioactive molecules which contribute in building and supporting human cells in the body. These molecule types are routinely used in reproductive medicine. Its very interesting that whenever the estrogen levels are higher in a woman’s body, their cuts or bruises heal faster. This is the reason pregnant women heal faster because they have such high estrogen. This is also the reason that an unborn baby inside the womb express scar-less wound healing because of the high levels of estrogen present. Researchers used the same RJS to spin ultra-thin soy fibres into wound dressings. These experiments also showed that soy and cellulose-based dressings on wound show 72 percent increased and improved healing, compared to only 21 percent in wounds without this soy protein dressing making them extremely promising. These dressings are inexpensive and thus optimally suited for large-scale usage, example for burn victims. Such cost-effective scaffolds are considered a revelation and have enormous potential for regenerative, especially for the militia, dressings under the umbrella of nanofiber technology.The Harvard Office of Technology Development has protected the intellectual property relating to these projects and is exploring commercialization opportunities.

Study has produced a new material which could adsorb...

Why ‘Matter’ Dominates the Universe and not ‘Antimatter’? In Quest of Why Universe Exists

In the very early universe, soon after the Big...