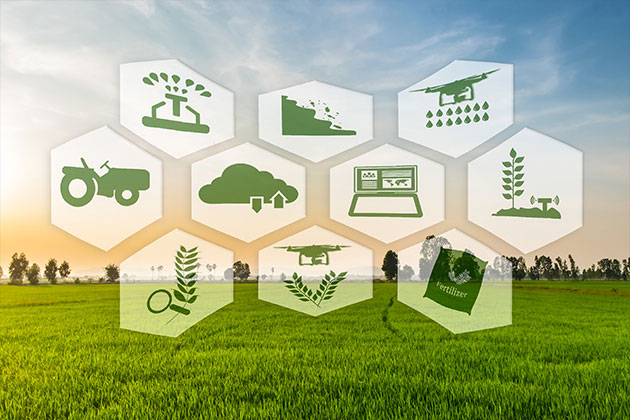 A recent report shows a sustainable agriculture initiative in China to achieve high crop yield and low use of fertilizers using an elaborate network of researchers, agents and farmers

Agriculture is defined as production, processing, promotion and distribution of agricultural products. For several decades, agriculture was often associated only with the production of essential food crops (wheat, maize, rice etc). Presently, it includes much diverse products and goes beyond farming by including forestry, dairy, poultry and fruit cultivation. Agriculture is the backbone of a country’s economy and it’s the central essence on which a country flourishes because agriculture not only provides food and raw material but also provides employment opportunities to a large percentage of population. It’s the main source of livelihood for many people especially in the fast-growing economics in the developing world where up to almost 70 percent of the population depends on agriculture, while for many countries export of agriculture products is a main source of income. Agriculture is very crucial to ensure economic growth, employment growth and food security for a nation.

In agriculture, productivity growth –measured as Total Factor Productivity (TFP) growth – is the key to measure the economic performance of agriculture and is important to drive income. It represents how efficientlythe agricultural industry combines inputs to produce outputs by using available resources. Obviously, these outputs and inputs are adjusted according to produce and costs based upon the demography. There have been recent improvements in this productivity due to continuous growth in agricultural production (food, fuel, fibre and feed – the 4fs) enabling farmers to lead to better outputs. This higher productivity has also at the same timeraised farm household incomes, improved competitiveness andcontributed to a country’s growth.

It is imperative to recognise that the prevailing agricultural practices of a vast number of smallholder farmers, in developing countries like China and India, do not meet requirements for sustainable productivity. To cater to the needs of a growing population worldwide, global food production must increase by 60 to 110 percent over 2005 levels by 2050 in order to meet the demand. Also, various impact of climate change and environmental degradation are already makes farming more difficult and need to be factored in, example agriculture itself produces greenhouse emissions of upto 25 percent. Therefore, food security together with environmental degradation are the two primary and closely linked challenges which mankind will face in the coming time. Thus, it is important to increase the efficiency of farmers while limiting the costing and environmental impact to ensure that agriculture provides a sustainable food source for the world’s increasing population.

A recent report published in Nature shows an extensive collaboration of scientists from University of Pennsylvania, USA and China Agricultural University in successfully implementing a long-term, broad-scale intervention that both improved yields and reduced fertilizer application across China, marking it as a big step towards sustainable agriculture. This effort, which was enacted over a course of 10 years from 2005 till 2015, engaged nearly 21 million farmers across the country covering 37.7 million hectares of land. The first step in this project was to assess the different factors which affect agricultural productivity in various regions, these factors included irrigation, plant density and sowing depth. These were used as the guide to spread best practises across several regions. So, no sharing of agricultural tools was required, instead only information was gathered and scientific data was pooled based upon the local conditions and agricultural needs. As a result of this programme, an increase in yield was seen on average of more than 10 percent, with maize (corn), rice and wheat outputs growing by some 11 percent over this decade. Also, the fertilizer use was lowered by 15 and 18 percent depending on the crop. The overuse of nitrogenous fertilizers is one of the biggest challenges in agriculture causing almost two-third of the world’s nitrogen pollution leading to reduced fertility of soils, algal blooms in lakes and ground water pollution. Therefore, these practises saved the use of almost 1.2 million tons of nitrogenous fertilizers leading to savings of $12.2 billion. This led to the farmers making more money from their land rather than spending on it.

It was not as simple and straightforward as it may sound, mainly because sharing and encouraging the farmers to adopt certain good practises is challenging because they have very limited resources which they have invested into their livelihood and their number is huge, running into millions in China and also let’s say for example India. But, the unthinkable was achieved and it was seen that the agricultural yield showed huge improvement, and on the hand other the use of fertilizers was decreased. These practises have been around for quite some time, but the new thing about this particular initiative was the enormous scale on which it was carried out, and with close, massive, nation-wide, multitiered collaborations between scientists, agents, agricultural businesses and farmers (a whopping number of 1,152 researchers, 65,000 local agents and 1,30,000 agribusiness personnel).The project was carried out in two parts. In the first part, scientists and technicians helped gain a sense of what agriculture in the region was like and what the farmers desired. They devised strategies based upon weather, soil type, nutrient and water supply requirements and resources available. In the second part, agents and agriculture business personnelreceived training on how to implement scientist’s recommendations. These agents then trained the farmers to apply these scientific agricultural principles on the farms and also helped in designing fertilizer products which matched the needs of the farmers.In working closely together, data on nutrient, pesticide, water and energy usage etc was gathered for further reach and togain insights researchers conducted a survey of 8.6 million farmers from 1944 regions across the nation and found that the yields were improved by 10 percent and also up to 50 percent for some crops.

What made this study unique and also exciting at the same time is the larger scale on which it was performed with successful collaboration giving good and sometimes unexpected results. This programme must be monitored, updated and fine-tuned to the needs of farmers in specific regions while taking into account climate change.And, about 200 million smallholdings which are still not part of this programme in China must be brought in. Success of thisnation-wide intervention can mean significant learning terms of the scale of bringing such sustainable management practices to a large section of a country’s farming community. So, it should be applicable elsewhere and broadly speaking, could be translated to Asia and sub-Saharan Africa, because demographically these countries have small scale farmers who cultivate maybe only a few hectares of land but they are significant and dominating on the overall agricultural landscape of the nation. For example, India also has a lot of small land holding farmers with 67 per cent of them holding a farm of the size of less than one hectare. India also has a problem of low yields and high overuse of fertilizers and in countries of sub Saharan Africa both yield and fertilizer use are low. This study throws light on the basic aspects of engaging farmers and gaining their trust. However, one challenge that remains in translating this study beyond China to other countries is that China has a well-developed regional infrastructure, while other countries like India do not. So, it looks difficult but it’s not entirely impossible.

This study shows how a sustainable agriculture practise can produce economic and environmental benefit balancing the double objectives of adequate food production and environmental conservation. It provides hope towards making farming on smaller pockets of land more sustainable through suitable management practices.

The first temperature-sensitive textile has been created which can...