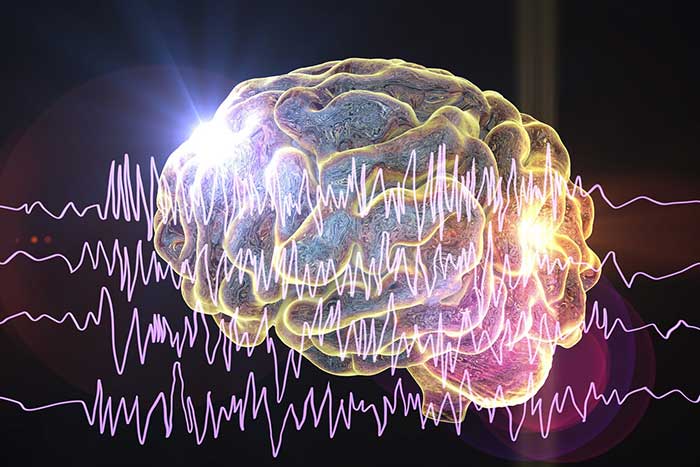 Our brain cells called neurons either excite or inhibit other neurons around them from sending messages. There is a delicate balance of neurons which ‘excite’ and the ones which ‘stop’ the relaying of messages. In the condition called epilepsy – a chronic brain disorder which affects people of all ages and gender – neurons in one’s brain start to fire and signal to neighbouring neurons to also fire simultaneously. This causes an escalating effect which leads to imbalance between ‘exciting’ and ‘stopping’ activity. The root cause of this electrical activity is thought to be complex chemical changes which occur in nerve cells. A seizure occurs when electrical impulses escape their normal limits. A seizure affects a person’s consciousness or motor control. Seizures themselves are not an illness but are signs of different disorders in the brain. Some seizures are not noticeable but some are incapacitating for a person. While there are several kinds of seizures, the above type is associated with epilepsy. Epilepsy is one of the most common neurological disease with around 50 million people suffering from it worldwide. The most common treatment for epilepsy is use of epileptic drugs like benzodiazepines which not only have drastic side effects but are also ineffective in preventing seizures in 30 percent of epileptic patients. People with epilepsy and their families have to face stigma and discrimination attached to this disease especially in low-and-middle-income countries.

A team of British and French researchers at University of Cambridge, the École Nationale Supérieure des Mines and INSERM have shown an electronic device which when implanted in the brain of mice was able to detect the first sign of a seizure. After this detection, it was able to deliver a native brain chemical inside the brain which then inhibited the seizure from continuing further. Their innovative study has been published in Science Advances.

The electronic device is thin, soft, flexible and made of organic films allowing it to interface well with human tissue. It is also safe as does minimal damage to the brain. The electrical properties of these organic films make them ideally suited for such medical applications where interface with living tissue is needed. The neurotransmitter or drug in the device targets the origin point of the seizure and thereby signals neurons to discontinue firing. This causes the seizure to stop. A neural probe was used to transport this neurotransmitter to the affected part of the brain. This probe incorporates a mini ion pump and electrodes which monitor brain activity for potential seizure. When probe electrodes detect a neural signal belonging to a seizure, ion pump gets activated which then creates an electric field. This electric field enables drug movement across an ion exchange membrane from an internal reserve to outside of the electronic device by a process called electrophoresis which technically allows patients to control dosage and timing of the neurotransmitter drug in a more precise manner. The exact quantity of the drug to be released can be based according to strength of the electric field. This innovative method takes care of ‘when’ and ‘how’ much drug needs to be delivered for a specific patient. The drug is delivered without any added solvent solution which helps in preventing any damage to the surrounding tissue. The drug interacts efficiently with cells just outside of the device. Researchers found that only a small amount of drug was required to prevent seizures and this amount was accounted as no more than 1 percent of the entire drug which was initially added into the device. This is helpful as the device will need not to be refilled for lengthy durations. The drug used in this particular study was a native neurotransmitter in our body and it was seamlessly consumed by natural developments in the brain immediately upon its release. This suggests that the treatment described should reduce or even eradicate any undesired drug side effects.

The study needs to be performed more elaborately in mice to gauge potential side effects and then a corresponding study can be conducted in humans. It could be a while, several years perhaps, before this device is available in the market for public use. It also needs to be studied whether such a device can prevent seizures altogether. If this technique succeeds it could revolutionize medication for epilepsy and also help in other similar illnesses. There is hope that a similar approach could be used for a range of other neurological disorders including brain tumours, strokes and Parkinson’s disease.

A unique immunotherapy-based antibody approach has been developed which...

Engineers have invented a semiconductor made by a thin...
- Advertisement -
Join Our Facebook Group
100,577FansLike
71,995FollowersFollow
3,465FollowersFollow
31SubscribersSubscribe
ADVERTISEMENT