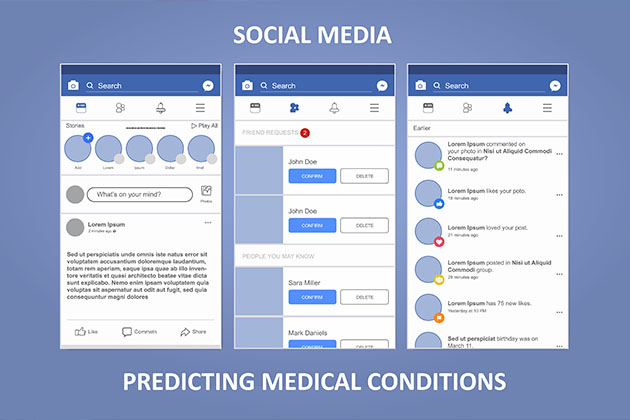 Social media is now an integral part of our lives. In 2019, at least 2.7 billion people regularly use online social media platforms like Facebook, Twitter and Instagram. This means that more than a billion individuals share information on a daily basis about their lives on these public platforms. People freely share their thoughts, likes and dislikes, sentiments and personalities. Scientists are exploring whether this information, generated outside the clinical healthcare system, could reveal possible disease predictors in daily lives of patients which otherwise may be hidden to healthcare personnel and researchers. Earlier studies have shown how Twitter can predict heart disease mortality rate or monitor public sentiment on medical-related issues like insurance. However, social media information has so far not been used for predicting medical conditions at an individual level.

A new study published on June 17 in PLOS ONE has for the first time shown the linking of electronic medical records of patients (who have given their consent) with their social media profiles. Researchers aimed to investigate – first, whether medical conditions of an individual can be predicted from the language posted on the user’s social media account(s) and second, if specific disease markers can be identified.

Researchers used an automated data collection technique to analyse full Facebook history of 999 patients. This meant analysing a humungous 20 million words in around 949,000 Facebook status updates with posts containing at least 500 words. Researchers developed three models to make predictions for each patient. The first model analysed the language of Facebook posts by identifying keywords. The second model analysed patient’s demographics information like their age and gender. The third model combined these two datasets. A total of 21 medical conditions were looked into including diabetes, anxiety, depression, hypertension, alcohol abuse, obesity, psychoses.

Analysis showed that all 21 medical conditions were predictable from Facebook posts alone. And, 10 conditions were predicted better by Facebook posts than even demographics. The prominent keywords were, for example, ‘drink’, ‘drunk’ and ‘bottle’ which were predictive of alcohol abuse and words like ‘God’ or ‘pray’ or ‘family’ were used 15 times more likely by people with diabetes. Words like ‘dumb’ served as indicators for drug abuse and psychosis and words like ‘pain’, ‘crying’ and ‘tears’ were linked to emotional distress. Facebook language used by individuals was very effective in making predictions – particularly about diabetes and mental health conditions including anxiety, depression and psychosis.

The current study suggests that an opt-in system for patients could be developed where patients allowed analysis of their social media posts by providing access to this information to clinicians. This approach could be most valuable for people who routinely use social media. Since social media reflects people’s thoughts, personality, mental state and health behaviours, this data could be used to predict onset or worsening of a disease. Where social media is concerned, privacy, informed consent and data ownership is going to be crucial. Condensing and summarizing social media content and making interpretations is the primary goal.

The current study can lead way to develop new artificial intelligence applications for predicting medical conditions. Social media data is quantifiable and provides new avenues to assess behavioural and environmental risk factors of a disease. Social media data of an individual is being referred to as ‘social mediome’ (similar to genome – complete set of genes).

Scientists have excavated the largest dinosaur fossil which would...

WHO’s Interim recommendations for the use of One-dose Janssen Ad26.COV2.S (COVID-19) vaccine

Single dose of the vaccine can increase vaccine coverage rapidly...