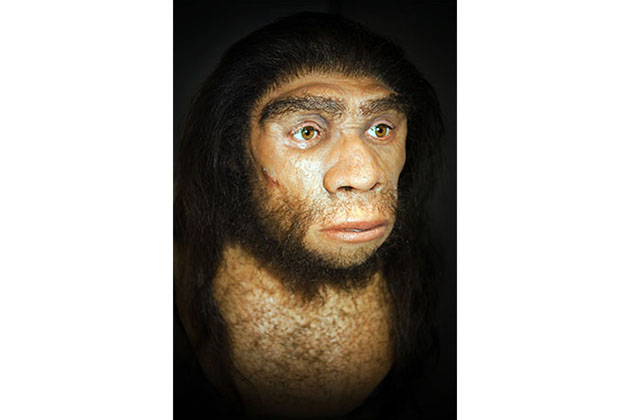 Neanderthals were a human species (called Neanderthal neanderthalensis) who evolved in Asia and Europe and coexisted for some part with current human beings (Homo Sapiens) who evolved in Africa. These encounters had led to human brings inheriting 2% of Neanderthal DNA and thus they are the closest ancient relatives to modern day humans. Neanderthals are last known to have existed about 130000 and 40,000 years ago. Neanderthals, commonly referred to as “cavemen” had a distinctive low long skull, wide nose, no prominent chin, large teeth and short but strong muscular body frame. Their distinctive characteristics are indicative of seeking a way for the body to conserve heat amidst the cold and harsh environments they lived in. Despite their primitive living conditions, they were very bright, talented and social humans with brain size larger than modern humans today. They were excellent hunters possessing skills, strength, courage and proficient communication skills. Even though they lived in challenging environments, they were tremendously resourceful. In fact, it is believed that there might have been a very narrow gap between Neanderthals and us humans in terms of behaviour and instincts. Fossil records show that they were carnivorous (though they also ate fungi), hunters and scavengers. It is still unclear if they had their own language, but complex dynamics in their lives does suggest that they communicated with each other using a language.

The Neanderthals are now extinct for 40,000 years, however, it’s still a mystery how a species which had survived for more than 350,000 years could face extinction. Some scientists have formulated that modern humans are responsible for extinction of Neanderthals since they may not have been able to survive ably with the competition in resources posed by early ancestors of modern humans. This must have also been aggravated by rapid change in climate conditions. Neanderthals did not all quickly disappeared but were replaced by modern humans gradually through local populations. Neanderthals are the most interesting part of human evolution which has intrigued scientists mostly because of close proximity of Neanderthals to modern day humans. And to support this research, many objects and fossils, even full skeletons have been uncovered which demonstrate a glimpse of the life of Neanderthals.

Growing a Neanderthal brain in the laboratory

Researchers at University of California, San Diego are growing the Neanderthals miniature brains (resembling a cortex which is the outside layer of the brain) of the size of a ‘pea’ in petri dishes in the laboratory. Each of this “pea” carry the NOVA1 gene of the ancestors and has about 400,000 cells. The goal of growing and analysing these ‘minibrains’ of Neanderthals is to shed light on small neural lumps which can tell us why this long-surviving species became extinct and what was the reason for modern day humans to instead conquer the planet Earth. It is important to understand this because some modern-day humans do share 2% DNA with Neanderthals through breeding and at one point we coexisted with them. The comparison of genetic differences in the brain can shed maximum light on their demise and rapid increase of homo sapiens.

To initiate growth of the minibrain, researchers used stem cell technology in which stem cells start to become a brain organoid (a small organ) over a period of several months. At their fully-grown size, these organoids measure 0.2 inches and are visible to the naked eye. However, their growth is restrictive because under the laboratory circumstances as they do not get the blood supply which is required for them to grow wholly. So, minibrain cells received the nutrients for growth by the process of diffusion. It might be possible to grow them further by perhaps inculcating 3D printed artificial blood vessels in them to enable development, which is something researchers would like to attempt.

First step towards comparing Neanderthal’s brain with ours

Neanderthal brains are more elongated tube-like structures compared to human rounded brains. In this exceptional work, researchers compared available fully-sequenced genomes of Neanderthals with modern humans. The Neanderthal genome was sequenced after retrieving it from bones in the fossils that were uncovered. A total of 200 genes showed substantial differences and from this list the researchers focused on NOVA1 – master gene expression regulator. This gene is same in humans and Neanderthals with just a slight difference (a single DNA base pair). The gene is seen to have high expression in neurodevelopment and has been linked to several neural conditions like autism. On closer inspection, Neanderthal minibrains had very few connections between neurons (called synapses) than typical and also had different neuronal networks somewhat appearing like a human brain suffering from autism researchers predicted. Its highly possible that humans had more advanced and sophisticated neural networks compared to Neanderthals which made us survive over them.

This research is at a very early stage to arrive at a conclusion, mainly because of the nature of controlled experiments. The biggest limitation of this study is that such minibrains are not “conscious minds” or a “full brain” and cannot really provide a complete picture of how an adult brain functions. However, if different regions are grown successfully, they can be fit together to gain a larger understanding of the Neanderthal “mind”. Researchers would definitely like to explore more about the ability of the Neanderthals brains to learn things and thus they would try to put these minibrains in the robot and understand the signals.

Scientists have improved the dating techniques of interstellar materials...

Omega-3 Supplements May Not Offer Benefit to The Heart

An elaborate comprehensive study shows Omega-3 supplements may not...

A pair of astronomers have made the big discovery...
- Advertisement -
Join Our Facebook Group
100,445FansLike
71,735FollowersFollow
7,959FollowersFollow
31SubscribersSubscribe
ADVERTISEMENT