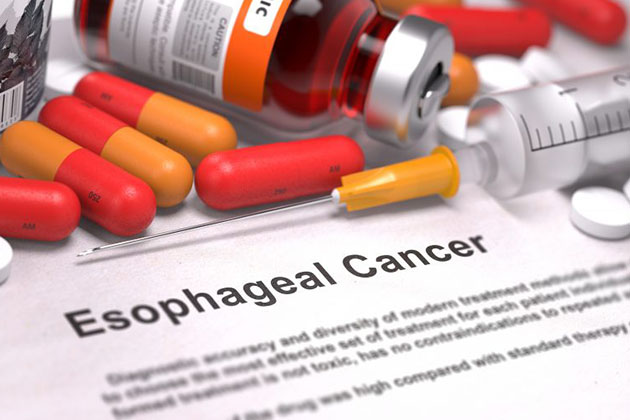 A novel treatment which “prevents” oesophageal cancer in at-risk patients is reported in a large clinical trial.

Oesophageal cancer is the eight most common cancer worldwide and one of the most dangerous. This type of cancer starts in the oesophagus – a soft muscular tube which connects mouth to the stomach and everything which is consumed by a person reaches the stomach through the oesophagus. When cancer develops in the oesophagus (commonly called food pipe) there is uncontrollable growth of cells lining the tube making them cancerous and causing havoc to the basic mechanism of ingesting food. Unfortunately, majority of symptoms associated with this type of cancer start occurring when the cancer is at an advanced stage i.e. when cancerous cells have blocked the oesophagus completely and cancer has spread to other parts of the body. This scenario makes treating oesophagael cancer very challenging. The early stages of this cancer are completely undetectable unless screened.

Overuse of alcohol and tobacco is the leading cause of oesophageal cancer. Other important risk factors are gastroesophageal reflux disease (GERD), Barrett’s oesophagus and obesity. In GERD, acid from the stomach moves up into the oesophagus causing a persistent heartburn. In another condition called ‘Barrett’s oesophagus’ occurring in 10 to 15 percent patients of GERD, the normal cell lining of oesophagus gets damaged after it gets replaced by ‘abnormal cells’ (called Barrett’s cells) mainly due to chronic acid reflux. These abnormal cells look exactly like the cells which line the stomach and small intestine but they are more resistant to stomach acid. The symptom for Barrett’s oesophagus is heartburn though in many cases no symptoms exist. As some time progresses, Barrett’s cells first become precancerous by a process called dysplasia and then later may become cancerous since high-grade dysplasia is linked to maximum risk of cancer. An early screening for precancerous changes can go a long way in controlling oesophageal cancer. Though not all patients with this condition get cancer but they are in the highest risk category. Maintaining a healthy diet and stable body weight can also reduce the risk for this cancer.

In a study published in The Lancet spearheaded by Royal College of Surgeons in Ireland (RCSI), the results of the largest cancer prevention clinical trial conducted over a period of 20 years has been reported. Researchers have discovered a new treatment which “significantly prevents” oesophageal cancer in at-risk patients. This study has been described as a major breakthrough in the field of cancer therapeutics in recent times. Around 2550 patients who were suffering from the abnormality ‘Barrett’s oesophagus’ were followed up over a duration of nine years and their health conditions were recorded. These patients owing to their condition had acid refluxes and thus were more susceptible to cancer as well as to non-cancer conditions like pneumonia. The main goal of the study was to find how this abnormality could be prevented from turning into cancer. The patients were randomly given one of the four different combination of medicines. These medicines were acid-suppressions (which suppress the stomach acids in general) and aspirin. So, either a low acid-suppression, a high acid-suppression, a low acid-suppression with 300 mg of aspirin or a high acid-suppression with 300 mg of aspirin was given to four sets of randomly selected patients. A precise combination of acid-suppression medicines along with aspirin can effectively prevent oesophageal cancer in patients suffering from Barrett’s oesophagus. Combination of high dose acid-suppression medicine alone prevented cancer, premature death and to some extent the progress rate of precancerous cells. Aspirin also showed some effect, and interestingly high dose acid suppression and aspirin together worked more in favour when compared to each of these taken alone.

This is a hallmark clinical trial which has displayed high standards of efficacy and safety. The results of this trial are significant. Less than 1 percent of patients suffered any serious adverse effects from these medications which is extraordinary. This is a new approach towards preventing cancer of the food pipe and this could be a gamechanger for the field of oesophageal cancer.

Scientists have fabricated artificial wood from synthetic resins which...

A review of previous trials shows that eating or...