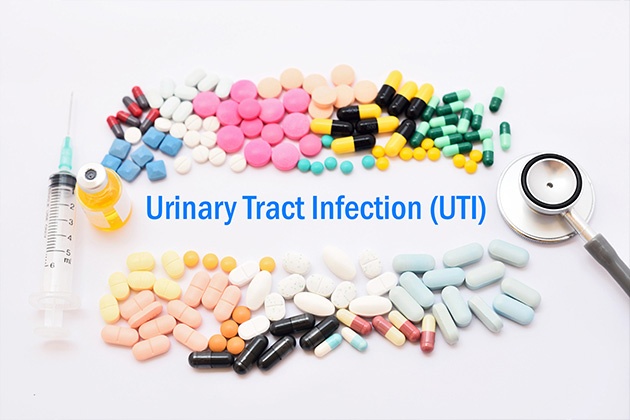 A urinary tract infection (UTI) is an infection in any part of the urinary system – kidneys, ureters, bladders or urethra. Most of such infections attack and affect the lower urinary tract, which is the bladder and urethra. UTIs are caused by microorganisms, generally bacteria which live in the gut and then spread to the urinary tract. It is the most common and recurring type of bacterial infection and a person of any age or gender can develop UTI. It is estimated that close to 100 million people acquire UTI every year and almost 80 percent of UTIs are caused by the bacteria Escherichia coli(E. Coli). These bacteria live harmlessly in the gut but can spread to the opening of the urinary tract and up to the bladder, where they can cause problems. UTIs are recurrent in nature because bacterial populations from the gut are continually filling the urinary tract with disease-causing bacteria. The symptoms include painful and burning sensation when passing urine and these bacteria might also travel till the kidney causing pain and fever and they may even reach the bloodstream. Such bacterial infections are treated by using oral medicines called antibiotics. Unfortunately, doctors are running out of oral antibiotics to treat such infections mainly because the bacteria which cause them are becoming more and more resistant to these antibiotics with each passing day and thus majority of antibiotics that are available at the pharmacy today are not working anymore. Antibiotic resistance is on the rise globally and one example which clearly shows where we have failed is the rise in resistant strains of the bacteria E. Coli since it is responsible for causing most UTIs. In such cases when the infection occurs its treated with antibiotics on the first go but when it occurs again and again 10 to 20 percent of cases do not respond to the antibiotic which was previously used. To treat reoccurring UTIs doctors have no choice but to either prescribe older, less effective antibiotics or they have to inject the medicine into blood because oral dose taken via mouth is not working anymore.

A new study conducted by researchers at Washington University School of Medicine in St. Louis, USA, shows a new way to treat UTIs without using antibiotics. The main goal is to block bacteria from adhering or attaching to the urinary tracts and thus treating the infection making this approach a completely novel way to tackle the problem of UTIs and antibiotic resistance as well by providing an alternative to our dependency on antibiotics. When causing a UTI, bacteria E. Coli.first latches onto the sugars on the surface of the urinary bladder using long, hair like structures called pili. These pili are like a ‘Velcro’ which allow bacteria to stick to the tissues and thus thrive and cause infection. The bacteria pili are therefore very important and the sugar to which they connect to are of various kinds, though E. Coli. is seen to favour a particular sugar called mannose. Researchers created a chemically modified version of mannose, called mannoside and when they released these mannosides, the bacteria via the pili grabbed hold of mannosides molecules instead and hence they were swept away as these mannosides were free flowing molecules, finally getting flushed away with urine. The sugar galactose attaches to adhesive proteins at the end of the bacteria’s pili. Similarly, researchers made galactoside against this galactose and after pitting galactoside against galactose, the bacteria latched on to galactoside instead of urinary tract-anchored galactose. The bacteria got tricked! To test the significance of galactoside, once E.Coli. was injected into mice, galactoside or a placebo was injected. It was seen that number of bacteria in the bladder and kidney dropped significantly. Both these treatments together were most impactful, with bacteria in the bladder dropped many-fold and in kidney they were nearly eradicated.

These two different inhibitors have a synergistic therapeutic effect as both these processes are involved in the attachment process during the infection. The bacterial pili which attaches to mannose plays an important role in urinary bladder, while the galactose attaching pili are more important in kidney. Not letting the bacteria latching on to these sugars can help fight infection in bladder and kidney. This study, published in Proceedings of National Academy of Science of the USA is encouraging and suggests a new ‘decoy’ molecule approach to trick bacteria and flush them out of the system. The pilus which have been used as a target in this study are found in most strains of E. Coli.and in other bacteria as well. Theoretically speaking, mannoside treatment could flush away many other bacteria, just like an antibody kills extra bacteria along with the target. But this can cause imbalance and lead to growth of harmful bacteria and destruction of good bacteria. To understand the events researchers measured the composition of gut microbiome after this mannoside treatment. It had minimal effect on other intestinal bacteria which were not responsible for UTIs. This is in stark contrast to the massive changes in abundance of many microbial species seen after treatment of a bacterial infection with antibiotics.

Though, the strain of bacteria was not entirely eliminated the results are nevertheless promising. Since the bacteria is unable to stay in the body, it is less likely to drive resistance because, unlike antibiotics, the drug would not force bacteria to die or evolve resistance in order to survive. The ultimate goal is to manage and prevent the common problem of recurrent urinary tract infections by providing an alternative to antibiotics. This assumes high relevance because of the worldwide crisis of antibacterial resistance. These findings have been proved so far in mice and human testing is the plan now. Since the first step for many disease-causing bacteria is to bind a sugar on a surface inside the body, this approach could be applied to other pathogens besides E. coli. By identifying such proteins which the bacteria is likely to use to attach to specific sites, we should be able to design compounds to inhibit their binding. However, before the galactoside enters human trials, further research is needed to show that it is not toxic and can be absorbed into the circulation when taken by mouth. Nevertheless, this is an important step toward developing alternatives to antibiotics. Since mannoside is not an antibiotic, it can be potentially used to treat UTIs that are caused by antibiotic-resistant strains of bacteria as well. A company called Fimbrion Therapeutics – co-founded by the lead authors of this study– is developing mannosides and other drugs as potential therapies for UTIs. Fimbrion is working with Phramaceutical giant GlaxoSmithKline on the preclinical development of mannosides for use in combating UTIs in humans.

Diagnostic tests for COVID-19: An Evaluation of Current Methods, Practices and Future

Laboratory tests for diagnosis of COVID-19 currently in practice...

Studies of the regions of Y chromosome that are...