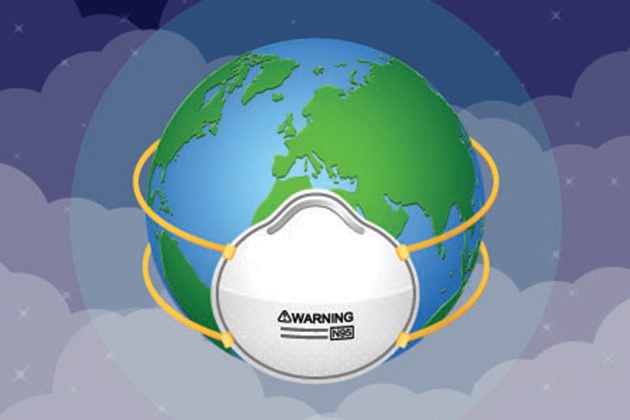 According to WHO, ambient air pollution is responsible for almost 7 million annual deaths worldwide due to exposure to fine particles in the polluted air. Ambient or outdoor air pollution is estimated to cause deaths in the range of 15-25 percent due to lung cancer, chronic pulmonary disease, heart diseases, stroke, severe asthma and other respiratory ailments including pneumonia. In just less than a decade, air pollution has become a major disease burden for our planet as it prominently sits among the top 10 killers. Indoor pollution via use of wood, charcoal, dung, and crop residue as solid cooking fuel and outdoor pollution caused by particulate matter is now a major global environmental and health problem. This burden is disproportionately higher in low- and middle- income countries than in high-income countries. There are several reasons including rapid urban expansion, less investment into cleaner sources of energy and pressure for economic growth. Also, prevailing winds and climactic events are now carrying pollutants to developed parts of the world like USA as our atmosphere connects all distant regions of the planet. This marks air pollution as a grave global concern.

Steady increase in air pollution across the country

A comprehensive study in The Lancet Planetary Health shows a first of its kind inclusive report on estimate of deaths, burden of disease and reduced life expectancy in association with air pollution across every region of seventh largest country of the world, India – a low-to-middle-income country as designated by the World Bank. The study reports that one in every eight deaths in India in the year 2017 was due to air pollution of pupils less than 70 years of age, the total number of deaths being 1.24 million. Both ambient as well as household pollution are one of the biggest factors for disability and death, more than tobacco or high blood pressure or high salt intake even. India, a fast-growing country is the second most populous country in the world and its population now stands as 18 percent of total world population. India has a disproportionally high percentage of disease burden and mortality- about 26 percent – of worldwide premature deaths caused by air pollution.

India’s annual average level of fine particles in air, commonly called PM 2.5 was 90 was 90 μg/m3–the fourth highest in the world and more than twice the limit of 40 μg/m³ recommended by the National Ambient Air Quality Standards in India and nine times over the WHO annual limit of 10 μg/m3. The minimum levels of exposure of PM 25 was between 2.5 and 5.9 μg/m3 and almost 77 percent of India’ population was exposed and unprotected to ambient air pollution limits above the national safe limits. Coarse particles are of lesser concern because they only cause irritation in eye, nose and throat. Fine particles (PM 2.5) are most dangerous and small enough to venture deep into lungs when breathing and they even might enter one’s bloodstream creating havoc on our lungs and heart and causing irreversible damage.

29 states of India were divided into three groups based on social development index (SDI) which is calculated using per capita income, education levels and fertility rates. The state wise distribution highlighted significant variation among regions. The worst affected regions were many states that were poor, less developed like northern states of Uttar Pradesh, Rajasthan, Bihar, Jharkhand which have lower SDI. If air pollution was well below national limits, the average life expectancy in these states would increase by at least two years. Interestingly, affluent states like Delhi, Punjab, Haryana and Uttarakhand also ranked poorly and were among worst affected and life expectancy in these states could also increase from between 1.6 to 2.1 years if air pollution is controlled. The pan country average life expectancy was evaluated to be at least 1.7 years higher if air pollution was causing minimal health loss. In the past decades there has been a decline in household pollution as usage of solid fuel for cooking is now steadily decreasing in rural India due to increased availability of clean cooking fuel, however strong sustenance is this area is a must.

This study is the first comprehensive study on the impact of air pollution for a country highlighting the ground reality and detrimental aspects of air pollution. The study was carried out by 40 experts across the nation led by India-State-Level Disease Initiative of the Indian Council of Medical Research, Public health foundation of India, Institute of Health Metrics and evaluation in collaboration of Ministry of health and family welfare, Government of India. Systematic efforts are necessary to address various sources of air pollution in India including- transport vehicles, constriction, industrial emission from thermal plants etc., use of solid fuels in residential or commercials, agriculture waste burning and diesel generators. Such efforts require region wise reference points for improving the situation and these reference points can be based on the robust estimates of health impact made in this study. It can be a useful guide to mitigate serious impact of air pollution in India and could also help us to gain perspectives for other low-income and middle-income countries. Different initiatives and strategies need to be devised by increasing community awareness and reforming polices.

An Accurate Diagnostic Marker for “Ancient Beer” Research and Evidence of Malting in Neolithic...

A team involving the Austrian Academy of Sciences have...

A wearable electronic device has been discovered which can...
- Advertisement -
Join Our Facebook Group
101,328FansLike
75,518FollowersFollow
1,966FollowersFollow
30SubscribersSubscribe
ADVERTISEMENT