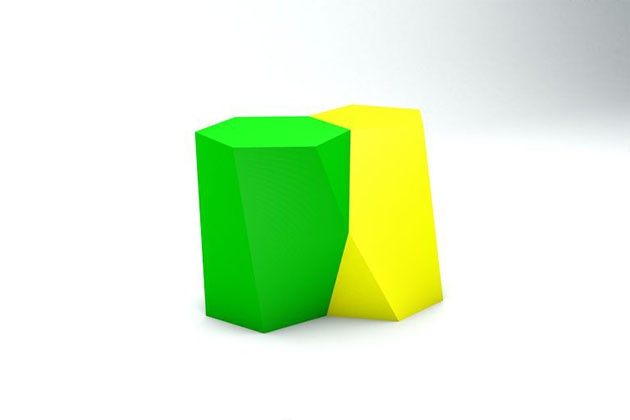 A new geometrical shape has been discovered which enables three-dimensional packing of epithelial cells when making curved tissues and organs.

Every living organism begins as a single cell, which then divide into more cells, which further divide and subdivide until billions of cells are formed to create the whole organism. Its one of the most enigmatic aspects of biology how starting from cells, first tissues and then organs are formed. Essentially, a simple structure of the embryo formed by only few cells becomes a living organism having complex organs. For example, millions of epithelial cells pack together to form the human skin, our largest organ and strongest barrier. If our skin was a completely flat surface, known geometrical shapes could be stacked together to build skin. But since our body is not flat these epithelial cells have to curve and bend themselves. Epithelial cells not just form the outer layer of our skin, but they also line the blood vessels as well as the organs in all animals. When an embryo is developing, tissues (made of cells) bend and form complex three-dimensional shapes which then become organs like heart or liver etc. The starting blocks epithelial cells ‘move’ and ‘join’ together to organize themselves and pack tightly to give an organ its final three-dimensional shape since most organs are curved structures. Because of this requirement of curvature, it is understood that epithelial cells that line the organs have to adopt columnar or bottle shapes to be able to surround organs while the embryo is growing. Epithelial cells also provide other functions like forming a barrier against infections and absorption of nutrients.

Researchers at Seville University, Spain and Lehigh University, USA conclude in their study published in Nature Communications  that epithelial cells adopt a shape something similar to ‘twisted prisms’. This new solid geometric shape has been dubbed as ‘scutoid’. This shape enables epithelial cells to achieve their purpose of providing three-dimensional cover to organs. Scutoid is a prism like structure, with six sides on one side and five on the other along with a triangle face on one of the prism’s long edges. This unique structure of scutoid makes it possible to stack them together with alternating five-sided and six-sided ends allowing creation of curved surfaces. This name does not exist in geometry and was chosen by researchers after careful consideration and owing to similarity of scutoid with the shape of a scutellum of a beetle which is the posterior end of an insect’s thorax.

Researchers used computational modelling technique utilizing Voronoi diagramming. This is the most commonly used tool to understand geometrical shapes across different fields. Modelling experiments showed that as the curvature in the tissue increases, cells constituting these tissues used more complex shapes than just columns and bottle-shapes as earlier believed. The epithelial cells adopt a shape which is previously undescribed and this particular shape helps the cells to make them more energy efficient while maximizing a steady packing. Researchers looked closely at three-dimensional packing of various tissues in different animals to analyse their views. Experimental data established that epithelial cells do adopt very similar 3D motifs as predicted by computational modelling. So, this new shape scutoid helps in bending and curving and allows for the most optimal way for the cells to remain stably packed. Once establishing that a new shape exists, researchers explored in other organisms for the presence of scutoid-like shape and they found that this shape was abundantly present. These scutoid-like shapes have also been found in epithelial cells of zebra fish and salivary glands of fruit flies and especially in those regions where tissue required to curve the most rather than have a flat appearance.

This is a very interesting and unique discovery which can further our understanding and help us control three-dimensional organization of organs (morphogenesis). It can shed more light on what happens when an organ does not form correctly leading to diseases. It could be of immense help in the field of growing artificial organs and tissue engineering as building scaffolds with correct packing structure would lead to better outcomes. The discovery of this new shape has potential applications across various scientific fields.

The novel coronavirus (2019-nCoV) has been given new name...