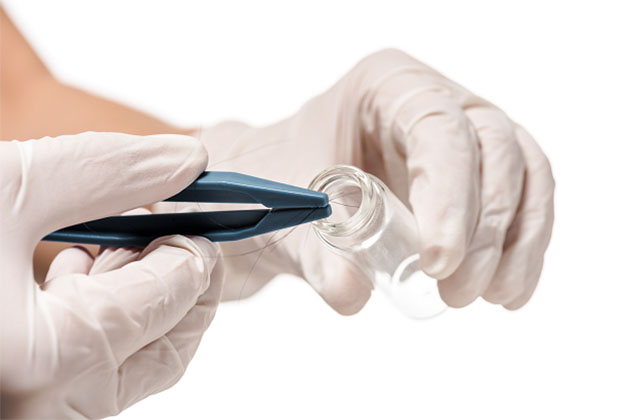 More than 1 billion people worldwide are deficient in Vitamin D. This deficiency affects primarily bone health and also increases one’s risk of cardiovascular disease, diabetes, cancer etc. Due to this implication assessment of Vitamin D has gained interest. Vitamin D is measured via a blood test which measures the concentration of best biomarker of Vitamin D in blood called 25-hydroxyvitamin D (25(OH)D3). The blood sample needs to be collected in hygienic conditions under trained medical personnel. This test is an accurate estimate but its biggest limitation is that it reflects status of Vitamin D at a single time point and does not account for high variability of Vitamin D thus requires frequent sampling. A single value may not be an ideal representation as Vitamin D levels could differ in our body depending upon season or other factors. The test is expensive and a cost burden especially in low-and-middle-income countries. But, because high proportion of population is now deficient in Vitamin D this blood test is being increasingly requested.

A study published in Nutrients led by Trinity College, Dublin has shown for the first time that Vitamin D can be extracted and measured from human hair1. Authors themselves provided three hair samples for the study, two harvested from crown area of the scalp and one from beard, which were cut into 1cm length, weighed, washed and dried. 25(OH)D3 was extracted from these samples using the same procedure used to extract steroid hormones from hair2 in which a mathematical formula takes measured concentrations of the biomarker using Liquid chromatography-Mass Spectrometry (LC-MS) or Mass Spectrometry (MS) and provides an approximation of concentration in the hair. At the same time, blood from all tissue samples was also analyzed using MS. Quantifiable concentrations of 25(OH)D3 present in both hair and beard samples were measured validating feasibility of such a measurement.

This is an inexpensive, non-invasive method to capture Vitamin D status and can help medical professionals to maintain levels of Vitamin D concentrations in a person over time. The exact association between Vitamin D in blood and in hair over a period of time needs further research as factors such as hair color, hair thickness and texture could affect Vitamin D in hair.

The origin of sarsens, the larger stones that make...