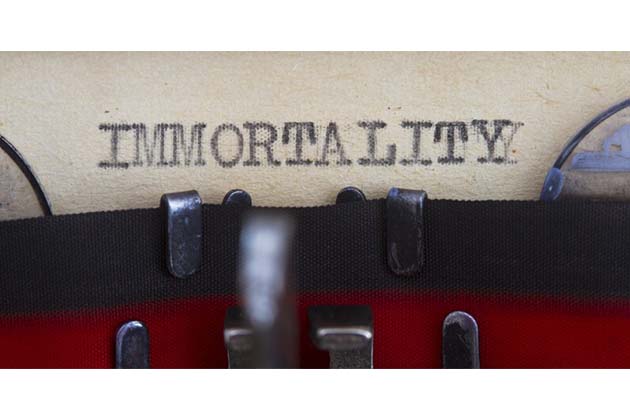 The ambitious mission of replicating the human brain onto a computer and achieving immortality.

Multiple research shows that we could well imagine a future where infinite number of humans can upload their minds to the computer thus having an actual life after death and achieving immortality.

Do we have the ability to make the human race immortal?

Every human being completes a life span by undergoing a steady process of ageing – starting from birth and eventually leading to death. Ageing is a natural and inevitable process in which the living cells in our body start to degenerate as we age. Thus, the human species has a ‘limited’ life span and every human being will go on to live for an average of 80 years. Still, it is not unusual that humans ‘want to be’ or rather ‘wish’ to ‘live forever’ and be immortal. Immortality has been tagged as a matter of fiction and a trait which in many cultures is possessed by spirits and Gods. People have always envisioned about possibilities that lie beyond the limitations of their biological bodies, an afterlife and no fear of death.

Currently, a lot of research is happening to understand if this science fiction can be turned into reality. It is being believed that the unthinkable might be achievable and science can provide a futuristic way for humans to evolve beyond their physical form and existence. A recent immortality research has shown that implementing certain ideas can extend the human life to around a thousand years1. In this study published in Plos One scientists have detailed how they were able to produce a pattern very similar the fluctuations in the brain suggesting that considerable portions of post-mortem human brain might retain certain capabilities through which it can still respond.

Through his 2045 initiative2, Russian billionaire Dmitry Itskov claims that humans will achieve digital immortality by uploading their minds to computers and thus staying alive forever by transcending the need for a biological body. He is working along with a network of scientists including neuroscientists and computer experts to develop what is termed as “cybernetic immortality”, within the next few decades (or by 2045). He and his team have proposed to create an ‘avatar’ in the next five years in which the entire human brain can be transplanted after death. The avatar will be robots who shall be controlled by the mind and they will keep sending feedback to the brain through an efficient brain-computer interface. This avatar could store a human personality till about 2035 and by the year 2045 a hologram avatar would be available. Itskov, labelled as a “transhumanist” claims that once this perfect mapping of the human brain and transfer of the consciousness into the computer becomes a success, any human can live longer as a humanoid robot body or as a hologram. Ray Kurzwell, director of engineering at Google Inc., has also boldly pointed out that the “human race is going to transcend to a non-biological entity for which the biological part is not important any more”.

The human mind can be immortal?

The human mind is a collection of different cognitive capabilities which include consciousness, sub-consciousness, perception, judgement, thoughts, language and memory. From technology point of view, making one’s mind immortal is not as unreasonable as it sounds, because a human mind is simply a software and the brain its hardware. The brain therefore turns inputs (the sensory data) into outputs (our behaviour) through computations just like the computer. This point is the start of the theoretical argument for mind uploading. It has been described as mapping the connectome – the complex connections of all the neurons in a brain – which hold the key to the human mind. If this process could be thoroughly mapped, then the brain could be technically ‘copied’ onto a computer along with the individual’s ‘mind’. The matter of our mind (the neurons) could be possibly transferred to a machine and erased from the brain while the mind will still have the continuity of experience that typically defines a human’s individuality. According to many neuroscientists, connectome could be very possibly implemented into a computer simulation controlling a robotic body outside of our physical bodies.

However, to be fair and realistic, this is a far more bigger challenge than it appears especially in the context of the existing technology and further complication by the fact that there are trillions of connections between approximately 86 billion neurons in a human brain and these neurons constantly change their activity. The “mapping” of all these connections with the current technology can only be done on a dead and sectioned brain. if at all. Also, most of number and kind of molecular-level interactions of the brain are not completely understood yet. Further, simulating one or several aspects of the brain might be achievable but that cannot let us emulate the brain collectively i.e. the “mind” even with the fastest computing power available.

The field of neural engineering is making significant advances toward modelling the brain and developing technologies to be able to restore or replace some of its biological functions. Mind uploading is a very ambitious goal and whole lot of debate is happening in the scientific community over the very central idea of whether the intricacies of the human brain can even be replicated in a machine. Many Physicists disagree with the interpretation of brain as merely a computer and they rather define human consciousness as quantum mechanical phenomena which arise from the universe. Also, the human brain possesses a dynamic complexity giving us various feelings and emotions at different points of time and transferring the conscious as well as the sub-conscious mind is much more complex and challenging.

Interestingly, scientists who are part of this transcendence research are sure of “what” they have do to achieve this, but are not clear about “how” in the present time and technology available. The fundamental challenge is to be able to precisely travel from a physical substrate of cells that are connected inside this marvellous organ – our brain- to our mental world which comprises of our thoughts, memories, feelings and experiences. ‘Human Immortality’ remains the biggest thought-provoking debate of the human existence. If we do have the ability to make the human race immortal, does that mean we should do it? This would mean that in 2045 the entire human race consisting of more than eight billion people—would have this incredible power at their fingertips to make themselves immortal. Cryopreservation is being considered as a Plan B to make life spans indefinite and not let people continue dying, until unloading of human brain is achievable in the next two decades. This process involves freezing of living cell, tissues, organs or even entire bodies (after death) in low temperatures to prevent and protect them from decaying. The basic premise is that once this preservation is done for an indefinite period of time, we could bring them back to life and be able to treat them for the medical conditions (which had killed them) in a rather future span of time when medicine and science would have progressed much ahead than what it was at the time of the actual preservation. Keeping in view all the observations and speculations that are being made, scientists worldwide comment that mankind’s scientific priorities should lie in making sensible choices about generating technologies to solve our very real current problems. And speculating about brain uploading, as it stands, sounds like a can of worms, very deviant from our future.

In a major advancement in robotics, robot with ‘soft’...

Aminoglycosides Antibiotics Could Be Used to Treat Dementia

In a breakthrough research, the scientists have demonstrated that...

COVID-19: What Does Confirmation of the Airborne Transmission of SARS-CoV-2 Virus Mean?

There are overwhelming evidences to confirm that the dominant...
- Advertisement -
Join Our Facebook Group
100,452FansLike
71,737FollowersFollow
7,959FollowersFollow
31SubscribersSubscribe
ADVERTISEMENT