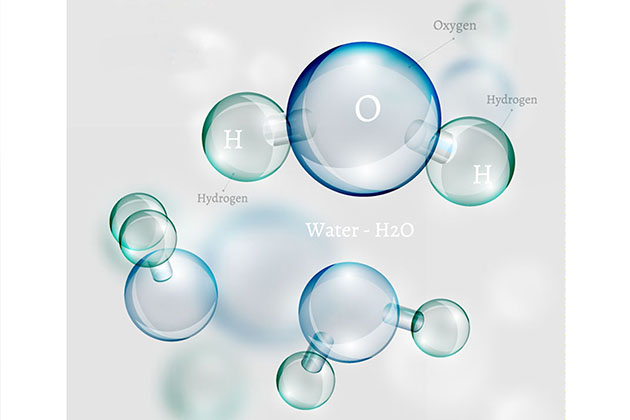 Researchers have investigated for the first time how two different forms of water (ortho- and para-) behave differently when undergoing chemical reactions.

Water is a chemical entity, a molecule in which a single oxygen atom is linked to two hydrogen atoms (H2O). Water exists as liquid, solid (ice) and gas (vapours). It is among the few chemicals which do not contain carbon and still can be liquid at room temperature (about 20 degrees). Water is ubiquitous and important for life. At the molecular level it is well known that everyday water exists in two different forms but this information is not of common knowledge. These two forms of water are called isomers and are referred to as ortho- or para- water. The main difference between these forms is very subtle and is simply the relative orientation of the nuclear spins of the two hydrogen atoms which are aligned in either same or opposite direction, hence their names. This spin of hydrogen atoms is due to atomic physics though this phenomenon is not yet fully understood. These two forms have identical physical properties and it has been believed so far that they should also then have identical chemical properties.

In a recent study published in Nature Communications, researchers from the University of Basel, Hamburg have for the first time investigated the difference in chemical reactivity of these two forms of water and have proven that ortho- and para- forms react very differently. Chemical reactivity means the way or the ability by which a molecule undergoes a chemical reaction. The study involved separation of water into its two isomeric forms (ortho- and para-) using an electrostatic deflector by involving electric fields. Since both these isomers are practically the same and have identical physical properties, this separation process is complex and challenging. The separation was achieved by this group of researchers by using a method based of electric fields developed by them for Free-Electron Laser Science. The deflector introduces an electric field to a beam of atomized water. Since there is crucial difference in nuclear spin in the two isomers, this slightly impacts the way by which atoms interact with this electric field. Therefore, as the water travels through the deflector it starts separating into its two forms ortho- and para-.

Researchers have demonstrated that para- water reacts around 25 percent faster than ortho-water and its able to attract to a reaction partner more strongly. This is definitely explained by the difference in the nuclear spin which influences the rotation of the water molecules. Also, para- water’s electrical field is able to attract the ions faster. The group further performed computer simulations of water molecules to corroborate their findings. All experiments were done with molecules in very low temperature settings almost -273 degrees Celsius. This is an important factor as explained by the authors that only in such conditions the individual quantum states and energy content of molecules can be well defined and better controlled. Which means that water molecule stabilizes as either of its two forms and their differences become obvious and clear. Thus, investigating chemical reactions can then reveal underlying mechanisms and dynamics leading to a better understanding. However, the practical use of this study might not be very high at this time.

Study had shown a scalable and affordable solution of...

Studying the Neanderthal brain can reveal genetic modifications which...