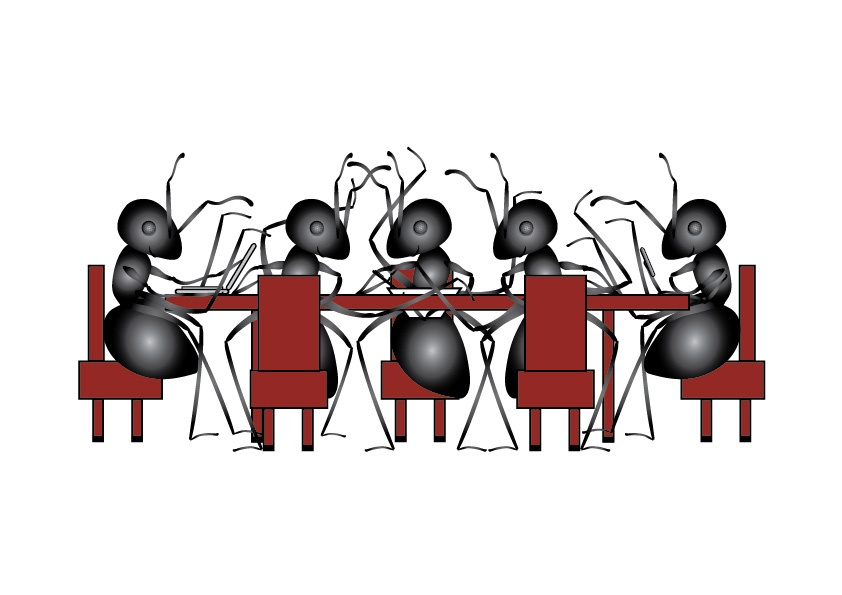 A first study has shown how an animal society actively reorganizes itself to reduce the spread of disease.

Generally speaking, high population density in a geographical region is the biggest factor which contributes to faster spread of a disease. When populations become dense it causes overcrowding which then leads to decline in living conditions. This causes the rate of disease transmission to increase mainly due to frequent and close contacts between individuals. Such populations become breeding grounds for infectious agents like viruses and bacteria.

Ants are organisms which thrive almost everywhere be it forests or deserts and they live in large colonies or groups. Ants are known to be very social and this behaviour gives them huge advantage over insects or animals which exist solitary. An ant colony is organized in sub-groups based upon their age and the tasks which each of these groups need to carry out. There are mainly three types of ants in a colony – queen ant, females who are mainly ‘workers’ and males. Their main goal is survival, growth and reproduction. So, ant’s interactions with other colony members are not really random as one would assume. The queen ant is the most important as only it can lay eggs and is the only member of an ant colony who can produce new members. The ‘younger’ ants, also called ‘nurses’ look after the brood at the centre of the colony. While ‘older’ ants act like foragers who travel and collect food from outside and for this reason older ants are more exposed and vulnerable to pathogens. A pathogenic invasion can cause spread of a disease and could likely terminate the entire colony.

A study published in Science shows that when a disease-causing pathogen enters an ant colony, ants modify their behaviour in order to protect their colony from an impending epidemic disease. They protect their queen and their entire brood from catching the disease and for this they have developed an interesting ‘defence mechanism’. An important aspect of this mechanism is the ‘social organization’ which takes place within the colony. Researchers from Institute of Science and Technology Austria and University of Lausanne carried out this study by using a ‘barcode’ system to carefully follow and understand the interactions between ants within a colony in normal circumstances versus when a disease is spreading. They placed digital markers on around 2260 garden ants and infrared cameras captured image of the colony every half a second. This method enabled them to follow and measure the movement as well as position of every ant member and also their social interactions within the colony.

To initiate disease transmission, around 10 percent of older ants or foragers were exposed to fungal spores which spread very fast. A comparison of ant colonies before and post pathogen exposure was made. Clearly, ants quickly realized the presence of fungal spores and they subdivided themselves into groups and changed their interactions with each other. Nurses only interacted with nurses and foragers with only foragers and their interaction with each other was diminished. The entire colony of ants changed their response, even those ants that were not exposed to fungal spores. This can be seen as a preventive measure as it reduces the risk of disease spread. qPCR technique was used to quantify the number of spores carried by an ant as spores would amplify the targeted DNA molecule. A track was kept on the number of fungal spores. When ants changed their interaction, the pattern of fungal spores also kept changing which was noticeable in the readings.

It was interesting to see that the ant colony protects its ‘valuable members’ who can contribute – queen, nurses and young workers – and their survival was of utmost importance. Detailed survival experiment showed that any pathogen load 24 hours after first exposure directly corelates with death from disease and with a high value of correlation. The mortality was high in older or forager ants than nurses and the most valuable member – queen ant – was alive till the end.

This study sheds light on dynamics of a disease from the point of view of ants as they collectively handle a probable risk of disease spread. It established that social interactions between organisms is of crucial importance during spread of a disease. The research on ants can guide us to understand processes which could be relevant to other social groups of organisms. We need to evaluate what impacts disease risk and what suitable control measures can be devised. Population-wide dynamics is imperative where factors like immunology, disease transmission and population structure are taken into account.