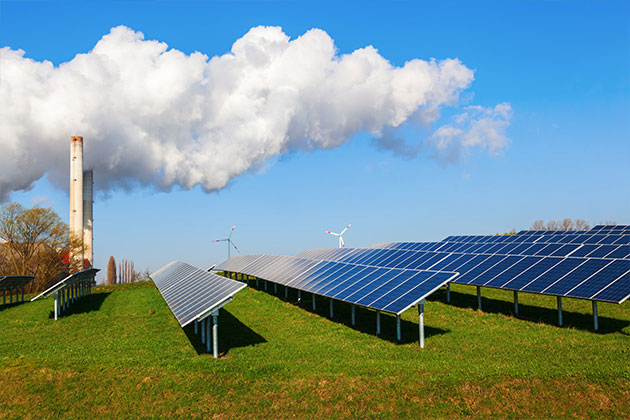 Study has calculated energy-return-on-investment (EROI) ratios for fossil fuels from first extraction stage till the last stage when the usable fuel is ready. It is concluded that fossil fuels EROI ratios are low, declining and are similar to renewable sources of energy. Development of cost and environment friendly renewable sources is needed to meet our energy demands.

Fossil fuels like oil, coal and gas are dominating the energy production around the globe. Fossil fuels are beleived to provide high energy-return-on-investment (EROI). This is the ratio of how much energy is needed to extract a fossil fuel source like coal or oil and how much usable energy this source will eventually produce. Fossil fuels like oil, gas and coal have high EROI ratio of 1:30 meaning one barrel of oil extracted can produce 30 barrels of usable energy. Since the EROI ratio of fossil fuels are usually measured during the extraction process from ground (the primary stage), ratios calculated so far fail to take into account the energy which is required to convert these ‘crude’ or ‘raw’ forms into usable fuels like petrol, diesel or electric power.

On the other hand, renewable sources of energy like wind and solar have been estimated to have EROI ratios below 10:1 which is far lower mainly because they require initial infrastructure like windmills, solar panels etc which comes at a considerable cost. However, fossil fuels are limited in supply as one day our planet will run out of them. Fossil fuels also heavily pollute the environment. Alternative renewable sources of energy are urgently needed.

A study published on July 11 in Nature Energy has investigated the global energy-return-on-investment of fossil fuels over a total duration of 16 years at the primary stage (extraction) and at the last finished stage. While EROI ratios at primary stage were approximately 30:1 and agreeable with previous calculations, researchers found that EROI ratios at the finished stage are 6:1. This number is also consistently decreasing and is similar to renewable sources of energy.

Sotrovimab Approval in the UK: A Monoclonal Antibody Effective Against Omicron, may work for...

Sotrovimab, a Monoclonal antibody already approved for mild to...

The remain of Britain’s largest ichthyosaur (fish-shaped marine reptiles) has...